Thoughts About MBTeamS and the (First) Great Tweet Race 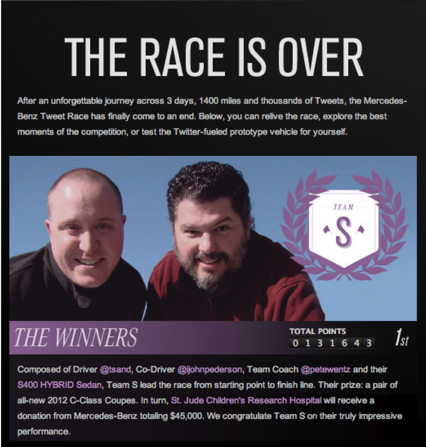 I haven’t checked, but I might have lost quite a few Twitter followers last week. Why? Because I participated in the Mercedes Benz Tweetrace (MBTweetrace).

The Tweetrace was a pretty crazy idea and an even crazier experience. Mercedes Benz fans submitted videos about why they and a partner should be chosen to drive a Mercedes to Dallas for the SuperBowl. Each team was assigned a celebrity coach to help out. Four teams were chosen and each team started out in a different city, heading to Dallas and converging at the big game.

The idea was that during the days they were driving, they’d mobilize their Twitter followers to tweet about the race. Hashtagged tweets enabled the teams to fill up virtual gas tanks and accumulate points. During the race, each team had challenges to complete—take a photo of Mercedes dealerships in towns they were passing through, for example. And their followers were assigned challenges, such as tweeting photos of signs supporting their team. The winning team members were awarded for their efforts with a new Mercedes—not to mention fame and glory. And, more importantly, a substantial donation to a charity.

Anyone who knows me knows that I’m not at all interested in sports, don’t really care about cars, and am pretty much skeptical about brands conducting this kind of activity in the first place. Not to mention the fact that I value my Twitter followers and don’t want to tweet more frequently, about more largely irrelevant things, than I already do.

But all that changed when Todd Sanders (@tsand) created an amusing, authentic, and sly video and won entry into the MBTweetRace. So I became one of a large number of people who tweeted on behalf of MBTeamS—led by Todd, his partner John Pederson and fueled by 1453 other folks who included the #mbteams hashtag in their tweets on February 2, 3, and 4, when the race was conducted.

In the process of participating in the race, I learned a few things about how to conduct these kinds of events—and how to succeed.

1. You need a compelling cause.

Todd and John were raising money for St. Jude’s Children’s Hospital, a charity chosen by their team coach, Pete Wentz, Chicago-bred bassist and frontman of the band Black Cards. Their own followers coalesced to raise $5,000 for St. Jude’s; Mercedes will contribute $25,000—and more if MBTeamS wins. A compelling cause for all who participated.

2. You need a compelling leader with a unique voice who’s able to engage people.

Todd works in student affairs at the University of Wisconsin-Green Bay. I’ve met Todd and count him as a friend. We met him about six years ago when he won a CASE award for his innovative use of YouTube in communicating with students. He’s still pushing the envelope in student affairs, as Eric Stoller noted in a terrific profile on his Inside Higher Ed blog.

But, more important, Todd is well known for his warm, amusing, unpredictable, sly, and totally authentic presence on Twitter (where I and about 4,000 others follow him). He’s amassed a large number of Twitter followers who work in higher ed and, as Tim Nekritz pointed out this week, Todd is beloved by this community. Like many others, I appreciate the fact that Todd is an original. I’ll do a lot for him.

3. Three days is a long time to participate.

Fortunately, one of the days was a snow day for a lot of people, so they could participate from home and that probably boosted support. Though I did notice a lot of tweets on Friday. For myself, I was on the road and in meetings and did what I could. It’s very difficult for people to pay attention and tweet for this length of time. I give Todd a huge amount of credit for being such a powerful voice and keeping us all focused. He was a masterful leader. Without his humour and engaging presence, it would have been a lot less fun.

It was tremendously exciting for those of us who were involved in the race supporting Todd. On the other hand, it was asking a lot of our Twitter followers to be involved along with us. I don’t know if I lost many followers, but one person left, tweeting: “I’m tired of the #MBcrap.” I was as absorbed in the race as I could be, given other commitments and responsibilities. But not everyone was.

4. It helps to have a tech-savvy community supporting you.

I haven’t done much investigation into the other teams and as I write, this, I don’t know who won. The winner will be announced tomorrow: follow @MBtweetraceHQ or join [url=http://www.facebook.com/mercedesbenzusa]the Facebook group[/ur/].

I do know, though, that if you look at the analytics on tweets alone, it’s hard to imagine any other team pulling ahead of MBTeamS, Todd & John’s team. At the start of the last day of the race, I tweeted this: “Here’s where we start: @tsand #mbteams = 65,485 pts; other 3 teams together = 73,564.”

And I captured this screen showing the tweet volume this morning: 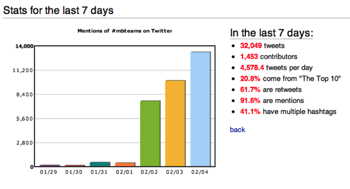 It was amazing to see how Todd’s support team used powerful tools to help meet challenges. One challenge was a Scavenger Hunt: supporters were tasked with coming up with images of Mercedes Benz-related locations and items. MBTeamS supporters built a Google doc to list the items and figure out how to track them down: at one point, there must have been 50 people editing the document simultaneously. It was thrilling to watch the Google doc being updated in real time and watch items being crossed off the list.

Being able to use technology in this way enabled Todd’s team to crowdsource the assets needed to meet this challenge.

5. In the end, community is everything.

Early on, bloggers with significant numbers of followers in higher ed rallied support to MBTeamS—chief among them Karine Joly, Andrew Careaga, and Eric Stoller.

Karine entitled her post “Let’s show the power of the higher ed community.” It was very exciting being part of the action, when I could be. There were a lot of ways to connect to this event—the support of St. Jude’s, doing something crazy with people you know, and a lot of people you don’t. I, and many others, definitely felt like we were connected to each other and do a larger community. Curtiss Grymala wrote, ” I think its amazing how well the higher education community (which made up the majority of supporters for Team S) bonds together for a cause.”

Or, as Alaina Wiens pointed out,

As I reflect on this experience, I’m sure I’ll have other thoughts to share. It’s been an amazing three days. And I want to thank Todd for giving me and so many others the opportunity to participate in a crazy, fun, and enlightening event. And to other MBTeamS supporter—thanks for a powerful demonstration of virtual community at work.

I’d love to hear your thoughts about the MBTweetRace—what you learned about the power of virtual community as you experienced it.

UPDATE 1, 5 February: MBTeamS won, and not just by a few points. The final total was 131,643 points, which means that Todd and John amassed more points than the second and third place teams combined. Mercedes is contributing $45,000 to St. Judes, which means that the total is more than $50,000 at this point. Truly amazing.

UPDATE 2, 7 February:
I’ll try to update this post to link to other posts about #MBTeamS:

Mark Greenfield
Mark aka @markgr wants to create a poster aggregating the avatars of all those who tweeted on behaf of MBTeamS to give to St. Jude’s. He tweeted about this on Saturday: it’s a brilliant idea and I urge everyone to support it.

Michael Klein
Mike @dezguy added his own observations in the contents, below, but offered more detailed observations in his post. One of them, about the quality of the user-generated content on this campaign, is spot on:

This campaign is hands-down one of the best uses/integrations of user-generated content that I have seen. The photos, videos, commercials and tweets not only made the journey entertaining it served as the glue to keep the community engaged; all without hiring fake bloggers or sponsored tweeters.

Lori Packer
Lori (url=http://twitter.com/]loripa[/url])stresses community, too. But I love this particular observation in her post, about how important people are:

I still occasionally run into a critique of social media that goes something like this: Everyone just updates their screens all day. Why dont you go out and talk to some actual people for a change? To which I reply: Who do you think is posting all these updates and writing all these tweets?! PEOPLE! These are actual people, and because of social media tools like Twitter and Ustream … I can communicate with them even when were not in the same room or even the same city.

We often use buzzwords to measure the success of social media efforts content, engagement, influence, etc. Theyre important measures to ensure were doing our job. But an effective social media campaign goes beyond these numbers. The most successful campaigns are fun.

He’s right. The whole thing was fun. At least for me and the others who supported #MBTeamS by tweeting, liking, videoing, etc. Maybe not so much for our followers. Which is why I hope instititutions and brands who want to use this model for an event are judicious about how they plan it.

Robin Smail
@Robin2Go offers a cogent observation about the “value” of the team celebrity coaches in this post:

But I think it’s fitting—and compelling—that tsand was able to leverage his own brand and higher ed community to do it on our own, without celebrity help or endorsement. This community was engaged and invested in the outcome of this race and that investment was, quite literally, how the higher ed community blew the competition out of the water. The only time there was a follower spike by another team was by Team CL, whose coach, @RevRunWisdom, actively called on his followers to assist their drivers. Without continuous encouragement from the celebrity coach, however, they simply couldn’t sustain a last ditch effort.

I’ll confess that I never saw Todd retweet something by Pete Wentz and I didn’t know who Pete Wentz was until I wrote this post about the race and looked him up!

Talk about a trial by fire! Twitter newbie Eric Page—@highedcm—describes his introduction to Twitter during the MBTeamS event. Welcome aboard, Eric! You saw how powerful Twitter can be.

As I write this, @tsand is back to work (well: no today, a national holiday when he’s reported on Twitter that he’s making pizza). There are a couple more significant updates to report.

Michael Powers [url=http://museyroom.com/post/3228984954/the-tweet-race-epic-fail-for-mercedes-or-failing-like]muses[/ur] about whether the tweetrace actually boosted the Mercedes brand. I’ve pondered this myself; my own engagement in the race had nothing to do with the fact that Mercedes was sponsoring it and everything to do with supporting a friend—and contributing to St. Jude’s. Once I got into it, being part of a community was significant. I don’t feel increased affiliation with Mercedes, don’t lust after a Mercedes (even the hybrid), and don’t anticipate buying one. Ever.

I didn’t know until I saw the interview with Todd on HigherEdLive that he and his co-pilot thought the race was fixed and that they’d never win it. So they started as the underdogs and through organizing their community, they won. [Note: the interview is NSFW!]

John Pederson weighed in before the race and afterwards, too. I don’t know John, but I appreciate his statements about the power of social tools to organize a community.