New Research on Social Admissions to be Released on Wednesday 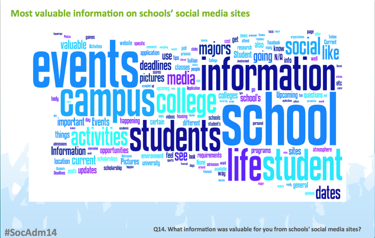 An image from the 2014 Chegg, Zinch, and Uversity Social Admissions Report.

Want to optimize your social channels for prospective students? Eschew stories and student testimonials and put your visitors in direct contact with current students, other admitted students, and admission counselors.

Those are just a few of the interesting and valuable findings contained in the 2014 Social Admissions Report by Chegg, Zinch, and Uversity, which will be released on Wednesday, 5 February. You can register for a free webinar on Wednesday at 3:00 p.m. EDT that will share many insights from this annual survey of nearly 1,800 respondents, 58 percent of them graduating in 2014. (Register here.)

Some additional findings: 86 percent of the teens surveyed said that college and university websites were extremely or very useful in their college search and choice; 34 percent said the same about social media sites. What did they search for on college websites, college search sites, and in other online sources? Scholarships were most important, followed by general campus information and majors.

There’s an across-the-board increase in the use of social media platforms in general. Facebook is still extremely important (85 percent use it, though there’s a 3 percent decline from 2012 to Q4 2013). Next most important were Twitter (with 54 percent of teens reporting that they used it) and Instagram (53 percent used it).

And, social media is influential. Nearly 70 percent of teens report that social media is moderately to extremely influential in their research about colleges. While 73 percent believe colleges should have a social media presence, they are underwhelmed with what they find on current channels: only 4 in 10 find information posted on college social media sites relevant.

Does anyone still believe that a responsive website is a luxury in 2014? Here’s an answer: As far as mobile is concerned, 77 percent use their mobile devices to access social media and 97 percent view college websites on their mobiles or tablets. Nearly two-thirds say the experience was “just OK” or “challenging.”

There’s a lot more in the study. Tune into the webinar to hear first-hand about the findings. Or, for your own copy, email outreach@zinch.com or tweet @socialadmission.