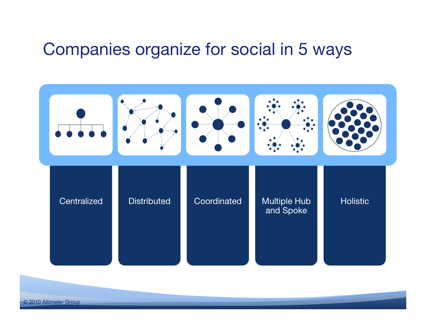 Organizing social media in .edu sounds like an oxymoron if there ever was one.

Consider that many institutions have some degree of difficulty managing marketing and brand activities—and the concept of integrated marketing (and acknowledgement of its importance) has been with us since the 1990s! Social media is much newer. And some leaders doubt its value—and perhaps don’t see a reason to manage it.

And then, even a small college is a complex, distributed organization that values openness. Participation in social media is baked into the culture on many campuses, with faculty, staff, and students participating in social media via blogs, Facebook, YouTube, Flickr and many other tools. This cacophony of voices shares many disparate views, using social media for personal and professional purposes, mixing it up, incorporating it in learning and teaching activities, and conducting research via social media.

Still, social media isn’t going to go away. And it can be a powerful tool for communicating with and engaging audiences that matter to the institution as a whole: prospective students, alumni, parents, various members of external publics, and others. It’s more important than ever that institutions find ways to manage some of this activity.

In the 2010 Survey of Social Media in Advancement, we learned that institutions that considered themselves to be successful in social media generally spent more time managing their social media presence: they were more likely to plan, measure, to have institutional buy-in and support, and to have policies. Our findings this year appear to be similar.

So one major area of focus for our 2011 white paper on social media in advancement will be exploring how institutions organize their social media activities.

To be perfectly clear: we’ll focus on social media for marketing, advancement, recruiting and other external relations purposes. That doesn’t mean that there aren’t good reasons to manage social media more broadly. Indeed social media can play an important role in connecting with internal audiences and serve many important purposes in student engagement, teaching, learning, and research. In an email to me, Mark Greenfield noted:

“I like to think of social media in three ways. First is the external audience…. Second is the internal audience. Based on conversations I had at the recent jboye conference, I am very interested in how a “social intranet” might work on a college campus. And last but not least is how social media impacts the classroom. In terms of management, it is important to leverage social media expertise on campus across all three areas.”

To guide my thinking about this, I’ve relied on work done by the inestimable analyst, Jeremiah Owyang (@jowyang). A partner in the Altimeter Group (with Charlene Li, the author of Open Leadership), Jeremiah conducts regular research with social media strategists and business leaders to learn about how industries manage social media, what they spend on it, and how they organize it internally—among many other topics.

It turns out that I’m not the first person in education to make the connection between Jeremiah Owyang’s models and education.

Mike Petroff, who’s the web manager for enrollment at Emerson College, Boston, posted “Social Media Strategy and Business Organizational Structure” on .Eduguru on 31 January 2011(!). In it, Mike explored the pros and cons of the distributed, centralized and coordinated models, which I’ll cover in more depth below.

This model of social media management is typical of organizations where social media activity develops in many areas at once. Owyang uses Sun as an example of a company where blogging is supported and encouraged by culture. And empowered staff members throughout the organization would find other types of social media appealing, too, and be free to explore them. In this kind of organization, there isn’t much “management” of social media—it simply happens, bubbling up from everywhere. People often don’t know what others are doing, or sharing, in their preferred SM channel.

In .edu, of course, innovations begin at the edges and may flourish there long before they are taken up by the institution as a whole. This is the way college websites developed: departments, schools or other entities launched their own site and after a while, someone began to connect them into an institutional website.

The same thing happened with social media on most campuses: individuals or offices began to blog, then launched Facebook pages or groups, or began tweeting. There was no thought to coordinating or asking from input from anyone with overall institutional responsibilities for marketing or communications.

And many institutions continue to function this way today. Some are culturally attuned to grass roots empowerment, a model that has worked well for them. For example at Harvard, people speak of “every tub on its own bottom,” indicating that units like the College, the Law School, and the Business School are solely responsible for their activities; there’s little or no coordination of any activities across units.

Other institutions haven’t been able to come to terms with the importance of social media and therefore don’t see a need to manage it, or have difficulty managing anything across units.

In contrast to the organic model, the centralized model reflects organizations where social media is controlled by a central office, often a marketing department. This is how Ford organizes social media—and Ford is often cited as an example of a corporation that “gets” social media and has used it effectively in crisis communications and marketing.

The major advantage of this model is that by adopting it, an institution can achieve an incredible amount of consistency in tone and voice across social media. So a college or university that’s focused on controlling its image will be eager to implement this model.

But you can see the problems inherent in adopting this model in education.

First, there aren’t many institutions where it would work. Too many people would question the control that the central team would have over social media and many of them would simply continue to do exactly what they’re already doing. It would be very difficult to police or shut down rogue social media accounts—the result would be too much ill will.

A major drawback with this model is that it won’t scale: large institutions like Ohio State or the University of Michigan will never be able to staff a centralized office to manage social media and even colleges would find it difficult.

Finally, while the centralized model may seem appealing to some, it could easily result in social media that appears way too controlled and inauthentic: too much like advertising or broadcasting rather than engagement.

In an organization that has adopted this model, one office or unit develops policies or guidelines and other procedures and is responsible for communicating them to other schools, colleges, departments, and other units. The central unit may continue to play a role as a coach, helping to establish and communicate best practices, etc.

You can see the appeal of this model immediately. Because various units control their own social media, there’s likely to be less push-back against guidelines. But there can be quality control over messages, usage, frequency, and tone. And the coordinated model is the only one that is likely to provide any ability to scale—it can work equally well at a small college or a large university with professional schools, research units, and other quasi-independent entities.

With this model, an institution has a real opportunity to excel in its social media activities. Owyang points out that this model allows an organization to develop a “Social Media Center of Excellence” that can have a major impact on how effectively units use social media. This is ”…a centralized program that provides resources, training, and strategy to a variety of business units that are deploying social media in order to reduce costs, increase efficiency, and provide standardization.”

The coordinated model is similar to the way branding/marketing initiatives function on many campuses.

Owyang identified two other models that are less applicable to .edu than those identified above.

He calls one of them the “Multiple Hub and Spoke, or “Dandelion.” It’s similar to the coordinated model, but exists in large, primarily multi-national organizations with many units and brands. He notes that it requires a high level of coordination and communication—one that I don’t believe that .edu could never achieve.

However, Mark Greenfield noted, “The Dandelion Model might be appropriate in extremely large universities, especially when individual schools within the university are in different geographical locations.”

Finally, there’s the “Holistic or Honeycomb” model. In organizations like Zappos, where each employee is empowered and can act independently, social media becomes a key channel for customer service. For this model to work, it requires a focused company with trained staff that share a common purpose. Executives not only have to buy in, but they need to let go of control and messaging, trusting that staff members will do the right thing.

What model does your institution use? How’s it working? What are its advantages and drawbacks? We want to know: we’ll expand this blog post into a section in our 2011 white paper on social media and advancement and are seeing insights from institutions that have a story to share. Please leave a comment below or email me: Michael.Stoner (at) mStoner.com.

Note: I’m extremely grateful to Jeremiah Owyang for the research he’s done on this topic – and for sharing it so generously with everyone. I’m also grateful to Mark Greenfield for his comments on this post and for Mike Petroff to alerting me to his post on .Eduguru, which I hadn’t seen when I published my original post on this topic.

It turns out that I’m not the first person in education to make the connection between Jeremiah Owyang’s models and education.

Mike Petroff, who’s the web manager for enrollment at Emerson College, Boston, posted “Social Media Strategy and Business Organizational Structure” on .Eduguru on 31 January 2011(!). Mike explored the pros and cons of the distributed, centralized and coordinated models. And in summing up, he made an important point: