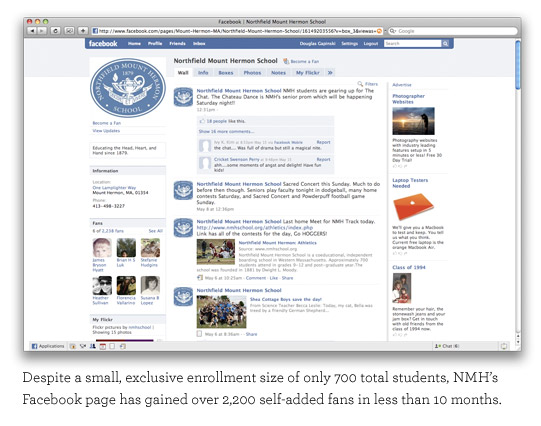 Northfield Mount Hermon School (NMH) is a ninth through twelfth grade private, college preparatory school located near the Connecticut River in the town of Gill, Massachusetts. This is an interview with Heather Sullivan, Director of Communications and Marketing for Northfield Mount Hermon, regarding how the school is handling social media as of May, 2009.

What is NMH currently doing with social media?
Basically, we’re maintaining a fairly robust presence on Flickr, Twitter, and Facebook, in addition to news and events feeds on our main public-facing site. We try to have as little overlap as possible in the feeds because we’re setting up certain areas like our boxes section in Facebook where feeds are consolidated. It gives our audiences a chance to participate in everything, or to view NMH through the channels they want to.

How and when did your team decide to set this up?
There was a moment about a year ago where NMH brought in new leadership in Admission, and myself in Communications and Marketing. And one member of the admission team was also interested in social media and really facile with the tools and implementation. There was a feeling that admissions work had been handled very traditionally and so the goal was to shake things up and rethink the strategy.

We are in the middle of a web redesign, and we couldn’t tackle big things on our current site, but what we could do quickly and at low cost was social media. Being involved in social media sends a message that we understand how young people communicate. The idea is to demonstrate to the public that we’re savvy enough to be using new channels intelligently, and show prospective students that we’re willing to communicate with them on their terms.

What have been the biggest challenges in putting social networking into practice in secondary ed?
We’re still working through how social media integrates with larger marketing efforts. We want to be sure that information we surface is complementary and not redundant, which is already a challenge when you think about maintaining 4 or 5 feeds almost daily. A little bit of overlap is acceptable for really important events, but we want to give the public a reason to participate with NMH on every channel. To do this, the information has to be a little different on every platform.

Another challenge is that internal expectations for our communications are very strong… we have high expectations about quality. When you move to a channel that works best when maintained daily such as Twitter, or a platform inviting participation from fans such as Facebook, those platforms have their own standards. Social media is inherently less formal and less controlled. Institutions have to strike a balance between the idea about formal messaging and circulating ideas more quickly and casually. There’s a delicate line you walk between informal and inappropriate.

Resourcing is also a challenge. We’re lucky enough to have a team who jumped at the possibility of setting this up on these platforms and they do a lot of work in keeping the platforms maintained. But resourcing is more complicated when it comes to social media, because you have to be aware of which trends to follow. Yesterday we were looking at Ning, and we were having a hard time thinking about how to apply it. So there’s a challenge in staying informed about which platforms will really help you accomplish your goals. You can’t jump on every bandwagon. For us, right now, it’s Flickr, Twitter, Facebook, and soon Youtube.

How many people were required to set up your presence in social media? How many people are required to maintain these efforts successfully?
For Flickr: Chris Arnini, our current Web Manager, helped set up and integrate flickr into our current site. The galleries are supported by him, by Sharon Labella-Lindale, Assistant Director of Communications, and by a faculty member who is shoots most events as part of his responsibilities.

Jesse Bardo, Admissions Counselor and Communication Coordinator, maintains and monitors our daily Facebook presence. Chris Arnini helped with the setup of the feeds. Kate Snyder, Writer, is the primary writer of the web site highlights.

Our Twitter presence is also maintained by Jesse Bardo.

What do others need to know if they want to try something similar?
I can’t imagine us being able to pull this off if we hadn’t started with a dynamic team of people who were (and still are) already interested in social media. Having one or two people in the organization who have a real love or affinity for social media is crucial. Invest in thinking and teamwork up front about what you’re going to do, think about adding texture or presence (e.g. boxes) up front. Be willing to put the hours into maintaining a presence on any platform you choose.

What kind of discipline issues or problems have you had on these platforms?
We haven’t had many problems with inappropriate messaging, which was the big concern most people had when social media first emerged. People were underestimating how social media has its own etiquette and online communities tend to self-monitor. Young people who have been participating in online communities are more aware of the boundaries and etiquette than adults are sometimes.

I don’t think the occasional bad apple in the bunch has a real negative impact at all. If nothing bad is ever mentioned, people begin to question the authenticity of the messaging. We often forget that negative messaging appears in print, as well. Most magazines are willing to run negative letters to the editor, even in the front of the magazine. If you have courage and you’re being yourself, you should be willing to share the voice of opposition… negative comments can foster a dialogue or create a level of engagement.

The most common negative comment tends to be alumni upset about decisions, and they don’t tend to use inappropriate language. We don’t want to hide these comments because it is important to discuss issues that upset people.

Do you have any metrics, or anecdotes, that indicate that social networking supports admission goals? How about alumni donations?
We do have some metrics about overall popularity and growth (shown below). I will say, because our institutional strategies right now are highly focused on enrollment management, we made the choice to focus on prospective students in this first phase of our social media presence.

Anecdotally, I think our efforts are working for admission, but it’s difficult to say how much impact these things have. It’s tricky to try to attach metrics about admission to something like a website redesign or social media because these things don’t tend to be the decision maker, they just help build or strengthen the case for why a student (or their parents) would want the student to attend. I could tell you that our yield is very strong right now, and our enrollment is stronger than it was last year (before we launched social media) but our social media presence is only a part of the work that we’re doing to support admission goals.

The focus this year for admission has been on quality of relationship. We weren’t necessarily going for quantity of applications, we were going for quality of relationship with prospectives and with parents. We saw social networking as another dimension of the relationship. Think about how Facebook helps a relationship. We like possible students seeing alumni posting that the time at NMH was the best four years of their life… or even stuff that’s less dramatic, like alumni talking about how they miss the place. Social media is a tool that allows the marketing types to step back and let people who are interested talk to one another.

What’s the next big thing you have planned for social media?
We’re currently working on getting a Youtube presence set up and mStoner is helping with this. Also, with the new web relaunch, we have a really cool integration piece that brings social media into the public-facing this site, but we’re not ready to show that to the public just yet, because we feel like it’s good enough that it’s going to be copied. Check back after the NMH site launches this fall.