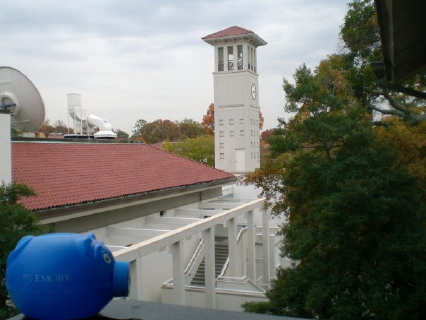 An integrated campaign focused on improving undergraduate donations to Emory University’s Annual Fund relied on social media (Facebook and Twitter) for outreach to Emory students and a boost in undergraduate giving to the Class Gift Campaign.

This year was the second year for Emory’s Blue Pig campaign. When the Class of 2011 entered the university, they were given a blue plastic piggy bank, with messages about the importance of giving even small amounts to Emory. The Class of 2012 received their own pigs when they arrived on campus. And this year, Emory’s Annual Fund staff created an integrated campaign to reinforce the value of giving—and having fun while doing it.

Here’s a brief explanation of the Blue Pig, from an Annual Giving FAQ:

Since the mid-1500’s, the piggy bank has been used throughout the world as a tool to teach the value of saving and mindful spending. The Blue Pig is starting a new tradition and serves as a symbol that a little change can make a world of difference. We are presenting each member of the entering Freshman Class with a special edition piggy bank to highlight the importance of giving back, while each sophomore will receive a blue pig t‑shirt at our events, you’ll receive a special thank you gift in return. We ask that you keep the piggy bank in a prominent place so you can remember to fill it with your spare change, which will count as a gift to your Class Gift Campaign. We will have periodic “Piggy Round-Up” events on campus throughout the year where you will have the opportunity to drop off your piggy bank savings.

This year, sophomores received bright-blue t‑shirts with a pig emblazoned on the front and the slogan “Feed Me. Love, the Blue Pig” on the back. “This works incredibly effectively as free advertising, and by only offering it to the sophomore class, these highly popular shirts have created a quasi-black market among the upperclassmen, which in turn, has created a student-driven hype that is its own form of fantastic publicity,” said said Cassandra Young, who, as program development coordinator at the Emory Annual Fund, coordinated the Blue Pig campaign.

Initially, the Blue Pig campaign relied on email for monthly communications, but staff members wanted more of a dialog with students. So they turned their attention to social media and other online forums where they could interact directly with undergraduates.

For his year’s Blue Pig campaign, Cassie Young created a Facebook page for the Blue Pig—and it turned out to be a little bit too successful. “I created a profile page for The Blue Pig, treating him as if he were a person. After I got about 1,000 followers, Facebook closed the page down because there were too many updates,” Young said. She recently joined Emory’s Alumni Association, leaving the Blue Pig temporarily without a human spokesperson to Facebook or tweet on his behalf.

Once the Blue Pig had a lot of friends on Facebook (and on campus), Young and her colleagues staged a “pignapping,” buying an ad in the student newspaper, publishing a ransom note on Facebook, and postering the campus. They “demanded” a ransom of $3,500 by the end of the semester for the Blue Pig’s release. The money raised would bring back the pig and provide students with stipends for textbooks. 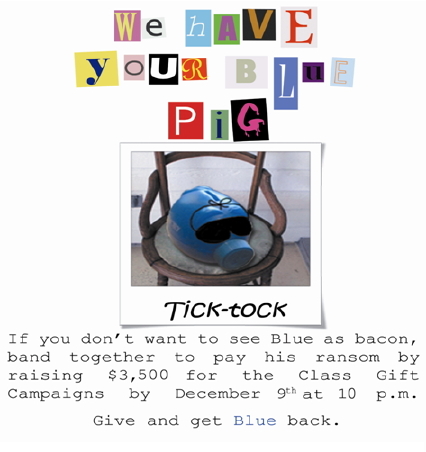 Young also created a Twitter ID (@thebluepig), which has 62 followers and 44 updates and was one of the early Twitter accounts at Emory.

As part of her commitment to online engagement, Young also monitored other public online forums. “I responded to a lot of comments.” Part of the challenge, she pointed out, is educating Emory undergraduates about why their gift is important. “We’re trying to be as transparent as possible and use language that students understand and relate to.” Indeed, the language on the Class Gift Piggy Bank web page is clear and straightforward.

“Engagement,” for Young, meant a lot more than social media. “Opening up a dialog meant that we wanted to be approachable, so I went to every single event and talked to students. I was able to have face-to-face conversations with them and answer their questions directly.”

Young manages the campaign herself—and it’s a lot of work. She ran a photo contest for students, inviting them to photograph their blue pig piggy banks on campus and offering a prize for the best photo. She didn’t put together a Flickr gallery from the results just because she didn’t have the time.

OK, but how has the campaign worked? “The giving rate has jumped enormously; in the first two months of the fiscal year, we’ve doubled what we’d done before,” she added. According to The Chronicle of Philanthropy,

Since adopting the pig as the class campaign mascot, the annual fund has attracted a 157-percent increase in the number of gifts from undergraduates. And the total amount from undergraduates collected for first seven months of this fiscal year has reached $12,915, compared with $682 raised during the same period last year.

Giving for the Class Gift Advisory Board reached 100 percent participation in one month. And here’s some more data:

Update: The Chronicle of Higher Education reported on the Blue Pig campaign in April, 2010.