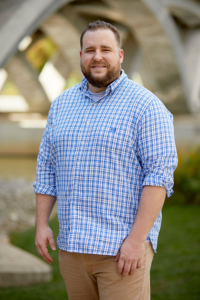 As a web developer at mStoner, Todd is responsible for collaborating with clients and the mStoner team to build and implement innovative websites.

Todd grew up in Dayton, Ohio where his mom was a teacher and his dad was a musician. He started programming in high school by building websites for local businesses. Todd went on to write for the Dayton Daily News while attending Wright State University where he earned his degree in marketing and eventually an MBA. After a stint in the mortgage industry, he began his career as a developer/consultant with a consulting firm in Columbus, Ohio. He’s been a full stack developer ever since.

Todd resides in Columbus with his wife, son, and dog. In his free time likes to travel with his wife as much as possible. If he’s home he’s typically writing or recording music for himself or others.

Todd shared her answers to mStoner’s version of the Proust questionnaire.

Favorite book: A Brief History of Nearly Everything by Bill Bryson.

Greatest achievement to date: My son

Your nemesis: All things fried.

Your greatest life lesson: No amount of talent can make up for a lack of work ethic.