Creating a Strong Sense of Place

The University of Pittsburgh at Bradford

Nestled between a national forest and a state park, the University of Pittsburgh at Bradford offers a high-quality education in a beautiful, serene setting.

Students receive a prestigious University of Pittsburgh degree along with the perks of a small, intimate campus. 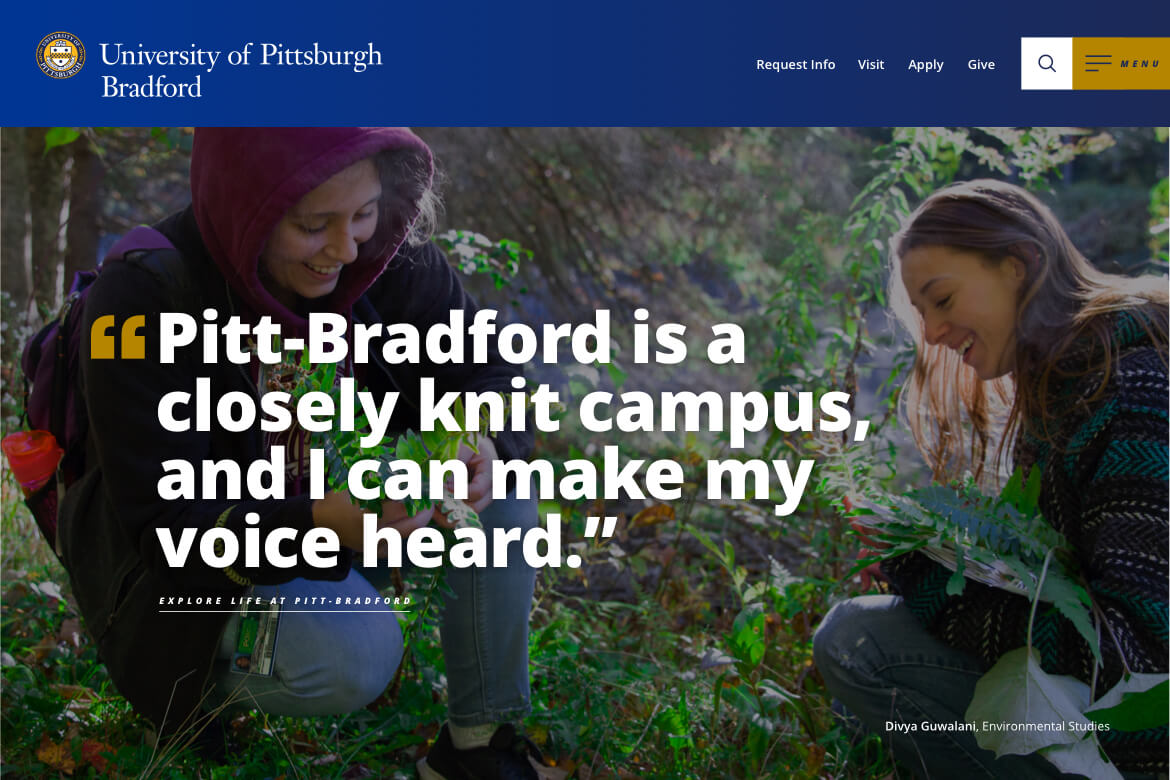 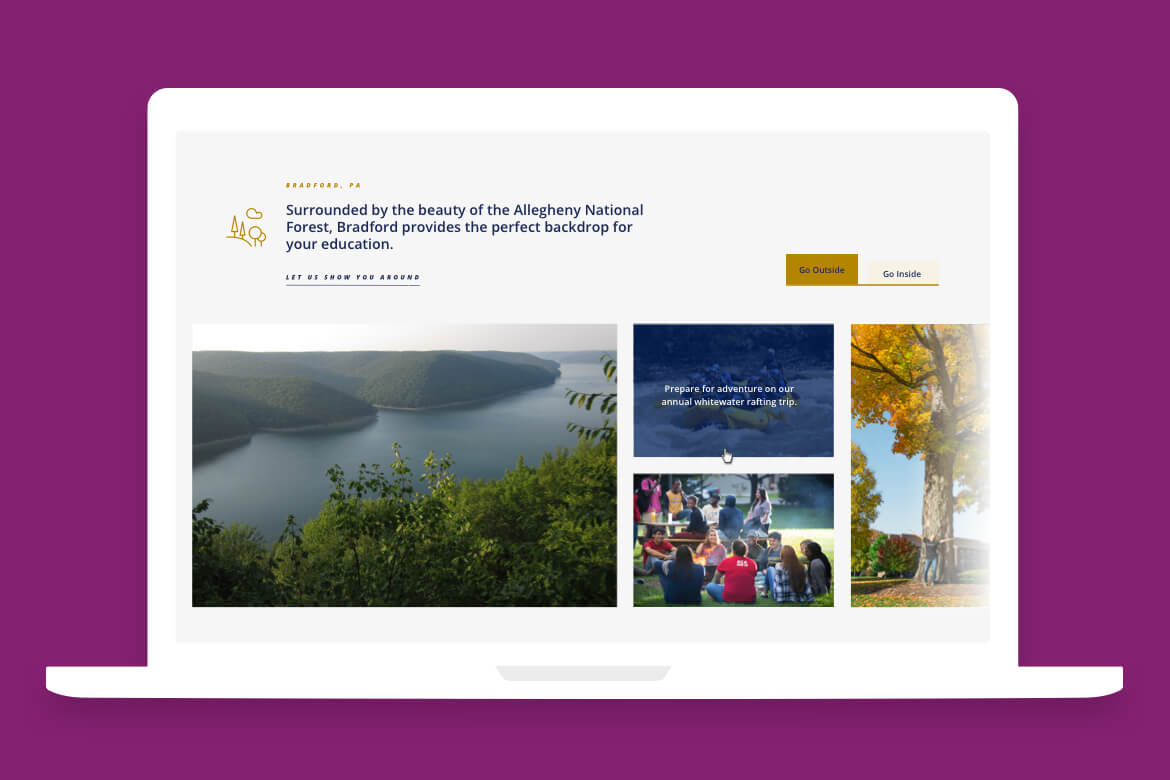 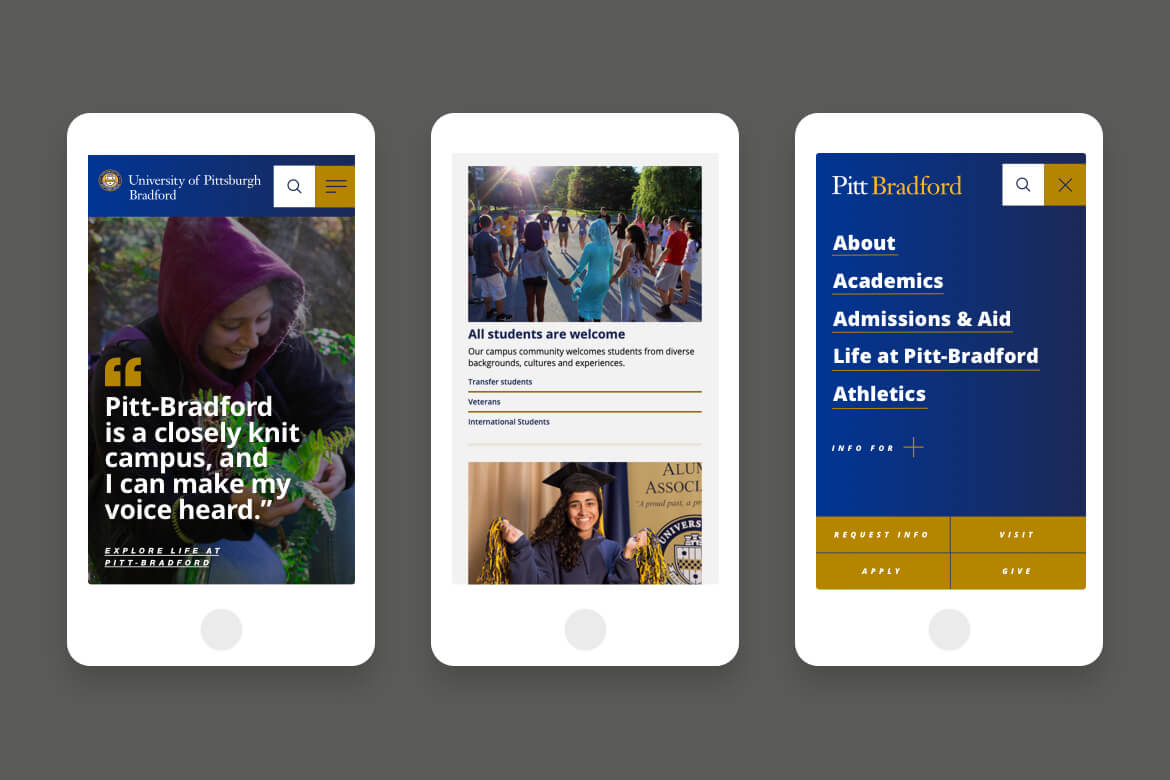 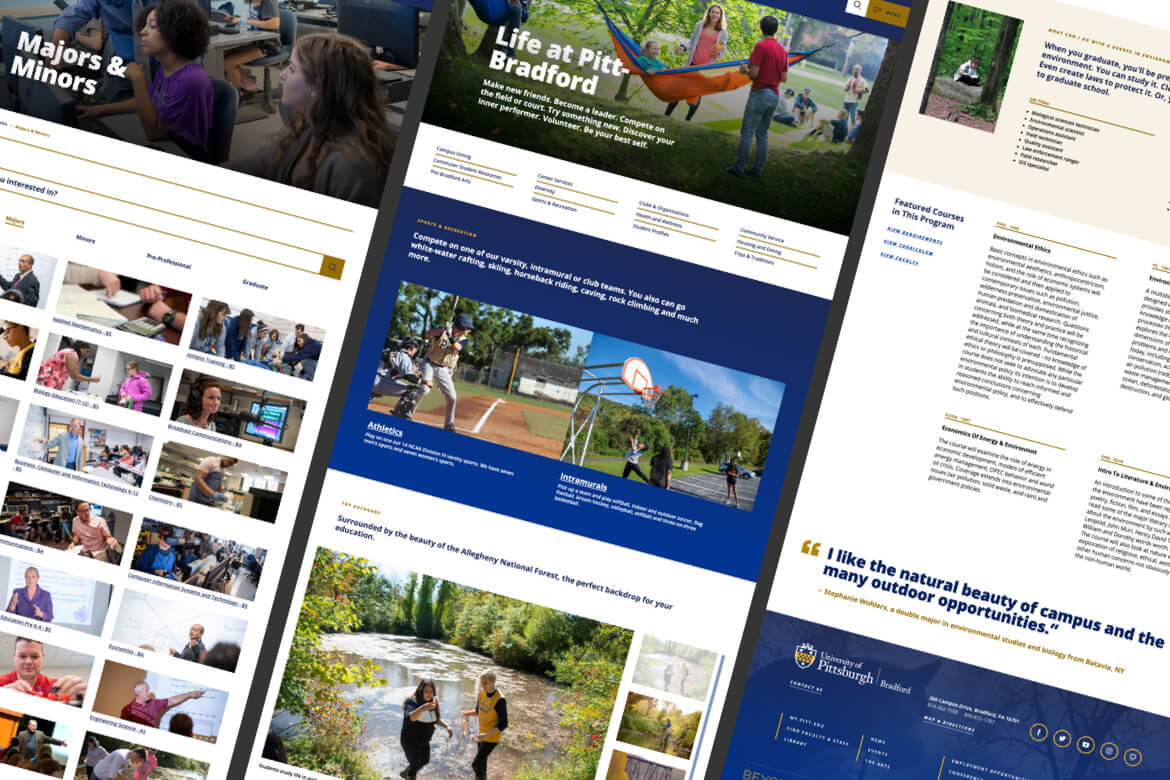 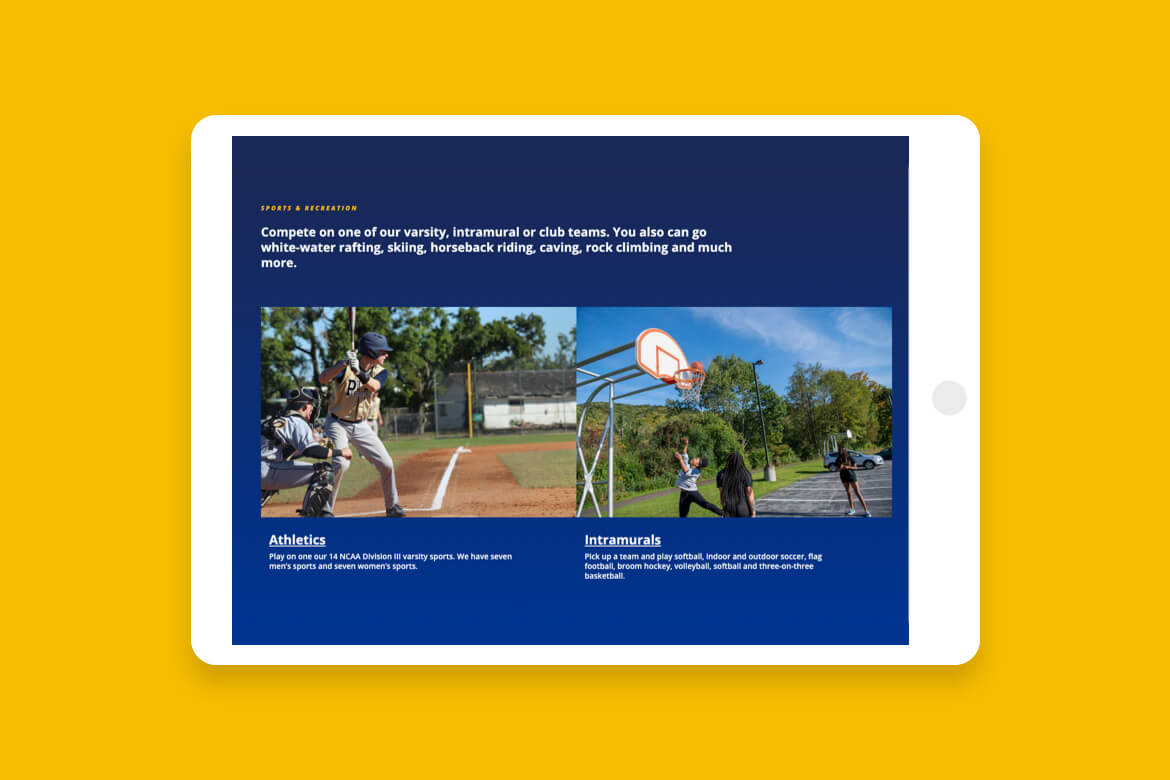 Pat Frantz Cercone, executive director of communications and marketing at Pitt-Bradford, knew it was time for a website redesign.

“It had been a while — longer than we’d like. We knew that we were behind and certainly wanted to have a beautiful, amazing website,” she said. “We also knew that people’s actions on a website have changed. Not only did we need a redesign, but we also needed to make sure that it was easier for our audiences to get to the information that they needed.” 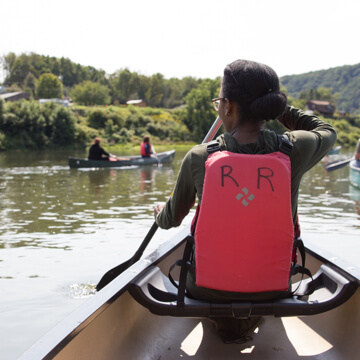 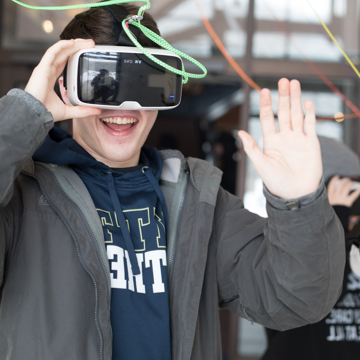 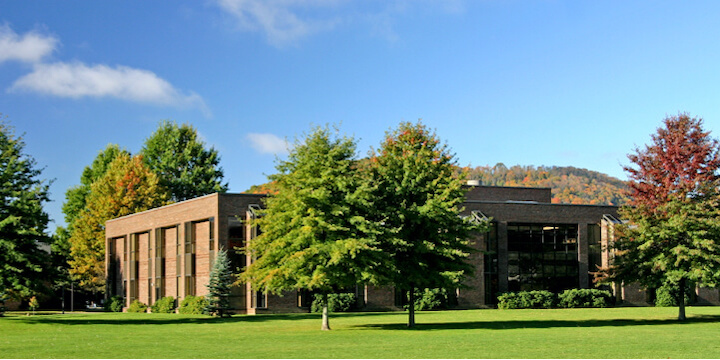 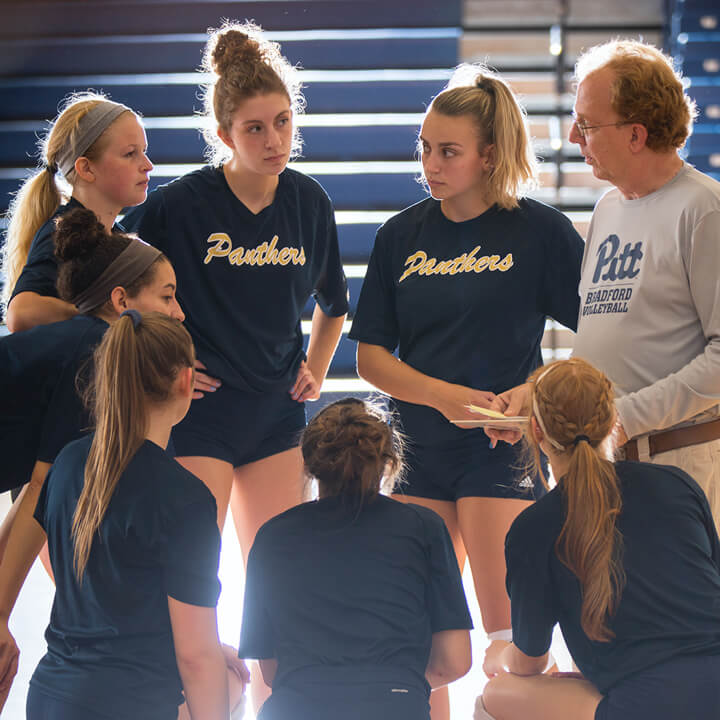 “We know it’s challenging in this environment to be distinctive. All of us at the various universities are saying the same kinds of things. We have great academics, our professors really care and the campus is friendly — and we’re saying that, too. But not everybody is located in such a lovely environment.”

Cercone hired mStoner to help deliver on these goals, in a bold and innovative way.

“I remember Pat telling us at the pitch, ‘Every regional college is focused on the same thing. How do you make us unique? I want you guys to push the envelope and do something great for us.’ So we felt some freedom to really explore,” said Ben Bilow, mStoner’s creative director.

At Pitt-Bradford, you can go from the classroom to kayaks, or from your homework to hiking, in mere minutes.

“It’s an intimate location where people feel like everyone knows their name and they’re surrounded by the best of the outdoors. And at the end of your experience, you get a University of Pittsburgh diploma,” said Voltaire Santos Miran, mStoner’s chief executive officer and head of client experience. “That mix turns out to be a right fit for many people. We wanted to bring a level of sophistication and romance to the site that would be more representative of the actual experience.”

The discovery process and experience-mapping workshops supported the strong emphasis on location. mStoner’s design team drew inspiration from tourism sites and set out to create a strong sense of place. The moment a visitor arrives on the homepage, they’re invited to “Go Outside” to explore Bradford as the outdoor playground it is, or to “Go Inside” and see the close-knit campus community in action.

Over the years, we had people tell us many times, ‘Oh, your website doesn't do your campus justice.’ And a lot of that had to do with the way that our previous site was designed. It didn't lend itself to those big, broad, impactful photos.

To support the location-first approach, mStoner created a design that relies heavily on large images.

Cercone’s team hired photographers to capture the majesty of the setting and the spirit of the campus. They provided the high-quality assets needed to make the design effective.

“My goal was to really showcase the beauty of the campus,” said Abby McLean, a user experience and visual designer at mStoner. “It goes beyond the homepage too. They really capitalized on photography across the site and used it well to give people a view into the Pitt-Bradford experience.”

Pitt-Bradford needed to move completely away from its old content management system to Drupal 8, which provided challenges and opportunities.

“We had to figure out all the things that were baked into their old site that needed a solution on the new site,” said Greg Zguta, director of client support at mStoner. “A lot of our technology discussions were around ferreting out those nuances. How do the directory, faculty profiles and search work?”

mStoner and Pitt-Bradford worked together to account for everything the new site could need, including elements that may not be a factor at launch but would come up down the road.

“Using the API that their course catalog, Acalog, makes available, we can allow content editors to enter the numbers for courses they want to feature for a program, and it pulls in the course name and the description from the catalog, so that stuff stays current,” Zguta said. “Then next year, if one of those courses is going away or they’ve got an exciting new course to feature, that can be done in a couple of clicks.”

mStoner conducted on-site user testing shortly after launch, and as a result was able to make some initial design and development adjustments quickly. This included bringing the desktop navigation in line with the mobile version, which students found to be more intuitive.

The first couple months of results have been very encouraging. Traffic is up on key pages such as admissions, academics, and program pages. Overall time spent on the site has nearly doubled.

Ultimately, Cercone feels Pitt-Bradford now has a site that more clearly illustrates all the advantages of a Pitt-Bradford education.

“We’ve gotten a great response,” she said. “This new design helps us to communicate what makes us special in a much more impactful way. I can write all the words I want — and I do write lots of words about how beautiful it is here and what that means for students or for recruiting faculty and staff — but a photo of the reservoir, or some kids going rock climbing or skiing, really can say so much more than I can.”