Not Just Business As Usual

University of Rochester School of Nursing

From young people with the simple desire to help others to experienced health care providers who want to teach or conduct cutting-edge research, students of all types achieve their goals at the University of Rochester School of Nursing. 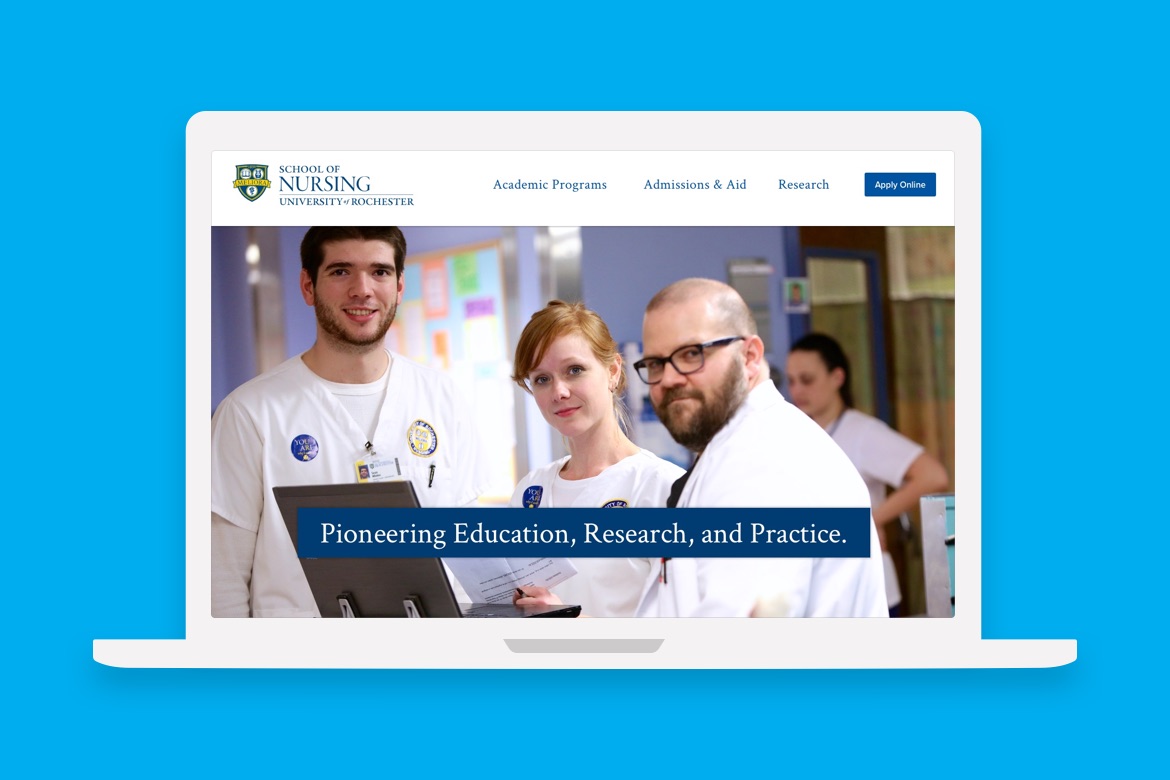 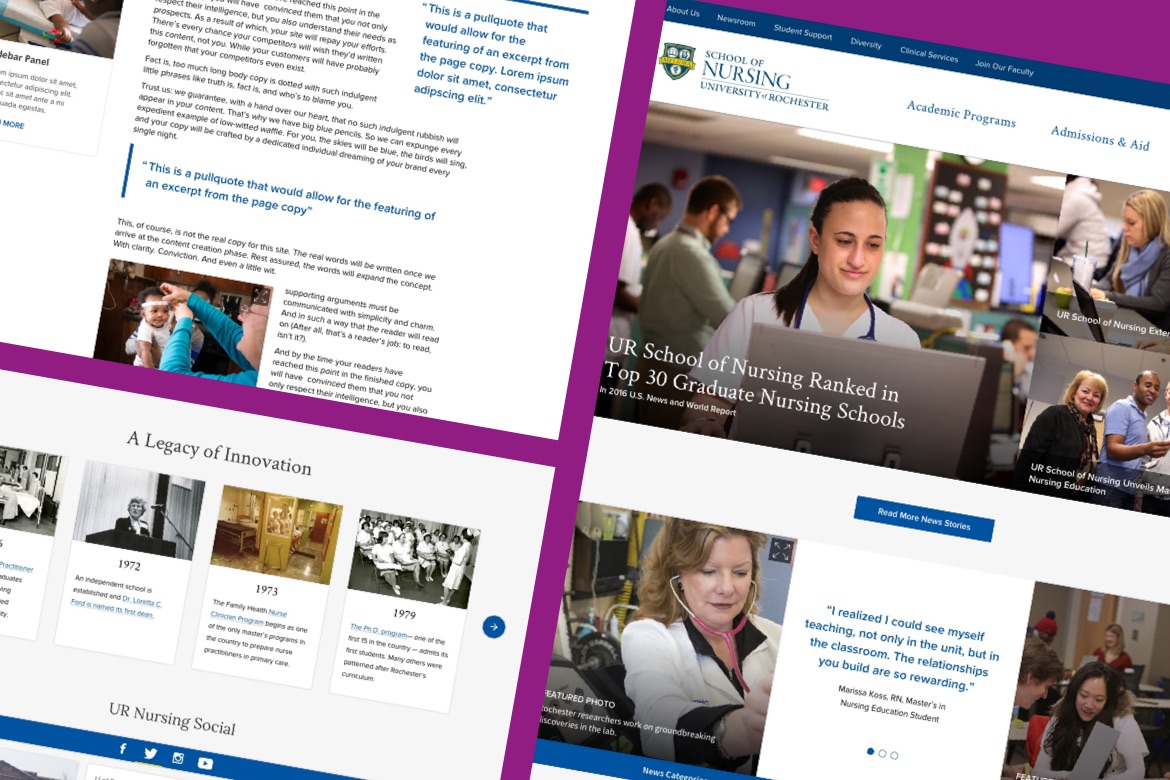 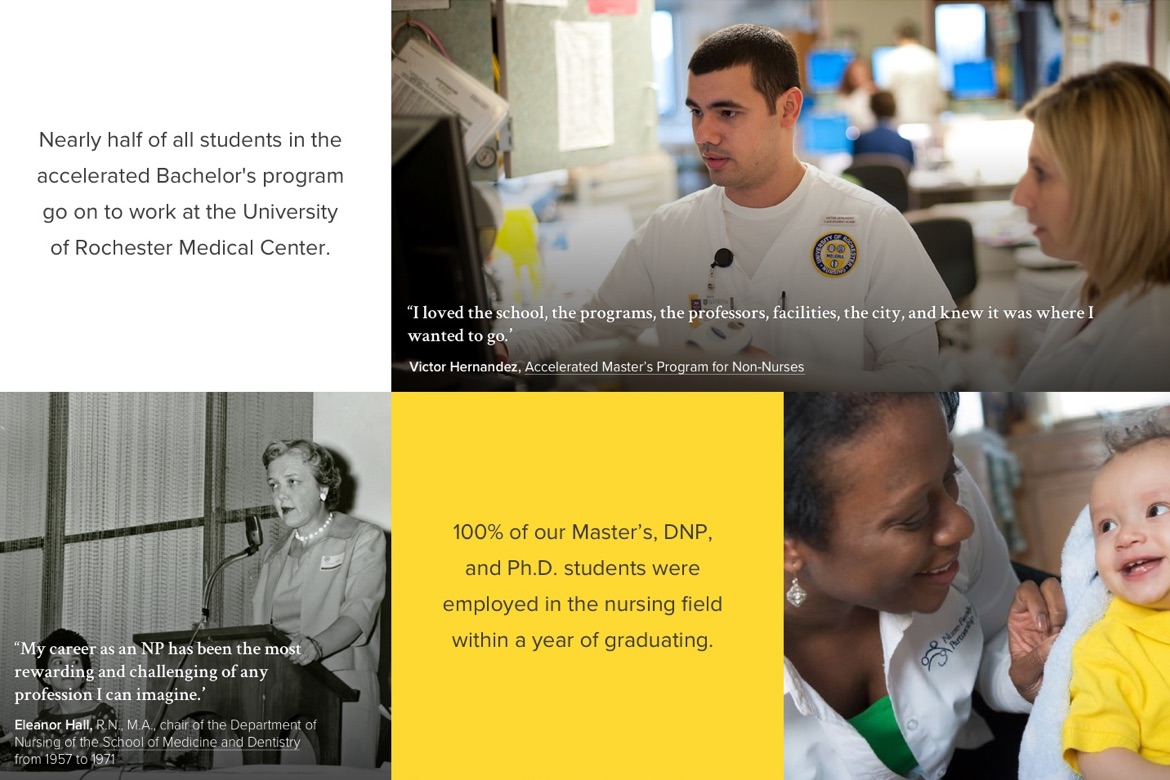 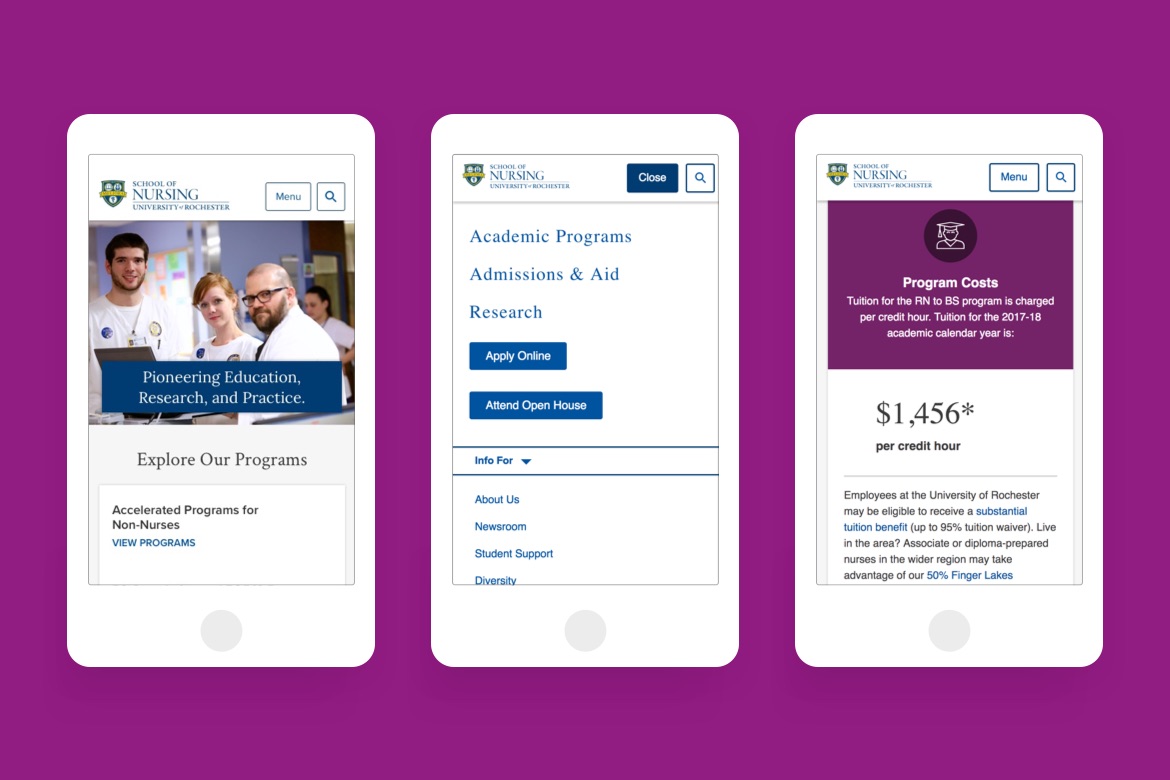 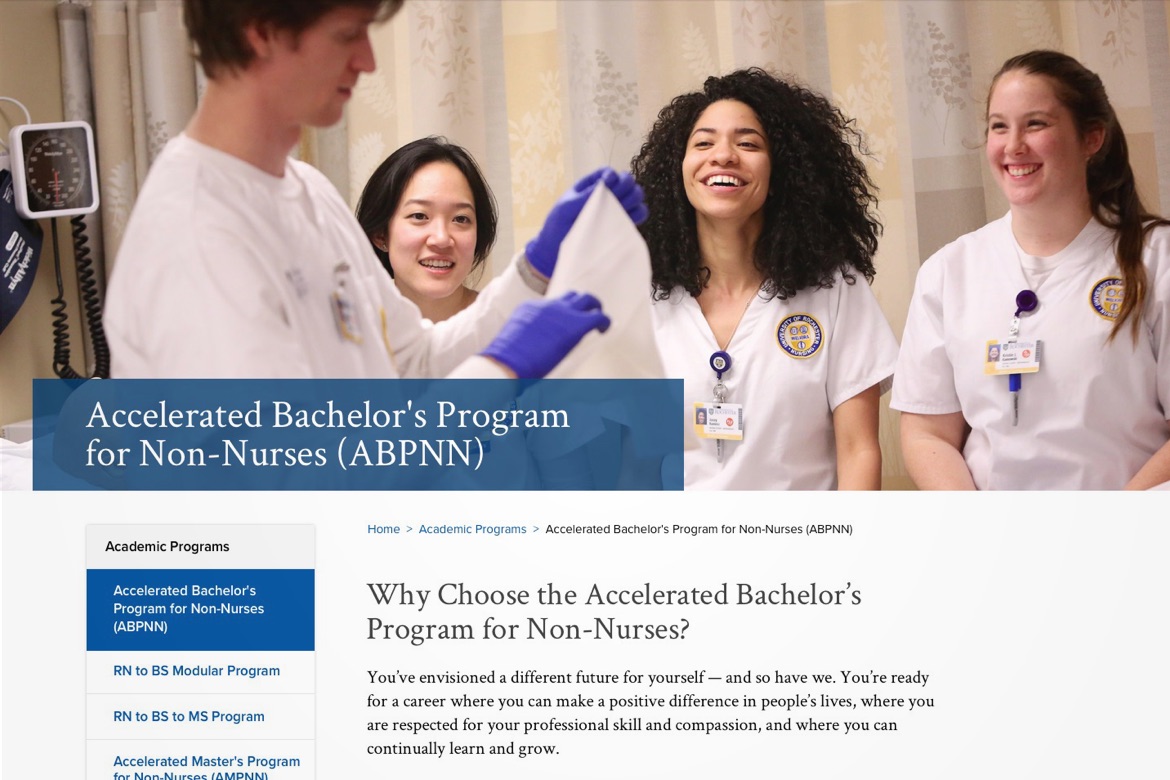 “We have undergraduate‑, master’s‑, and doctoral-level programs,” explains Brian Harrington, the school’s director of information technology services.  “We’re talking to [many different] people — who are in very different places in their lives and careers.”

The school’s 13 degree programs all offer instructors at the forefront of research and exceptional opportunities for practical experience and networking. In addition, the school is part of the largest medical center, teaching hospital, and employer in the Rochester, New York, area. The school’s mission has expanded to encompass research, practice, and business opportunities.

But the school’s rate of growth was declining, and some programs were not attracting as many students as they should. The school’s 2009 website had not evolved along with the school. With no one to manage the content, the site had become “a patchwork of different voices,” Harrington said.

Seeking collaboration and input on its website relaunch, the school assembled a team of staff members from the school and across the University of Rochester campus that included, among others, Medical Center Marketing Director Melanie Stinson. After considering many potential partners, the team chose mStoner because of its experience, portfolio, and positive references.

“mStoner has deep experience with education and could provide the perspective that we needed,” Stinson said. 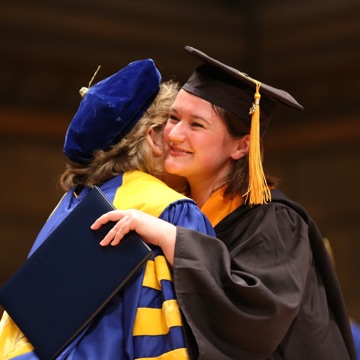 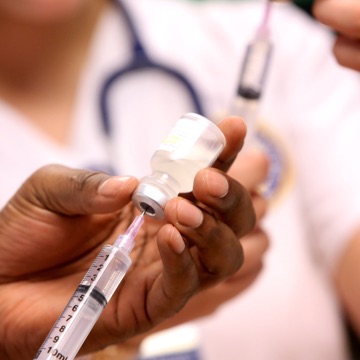 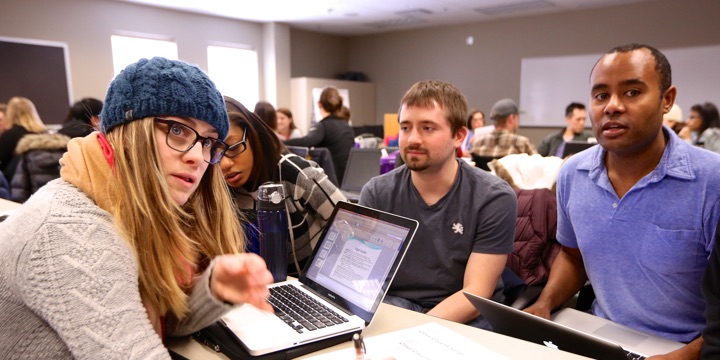 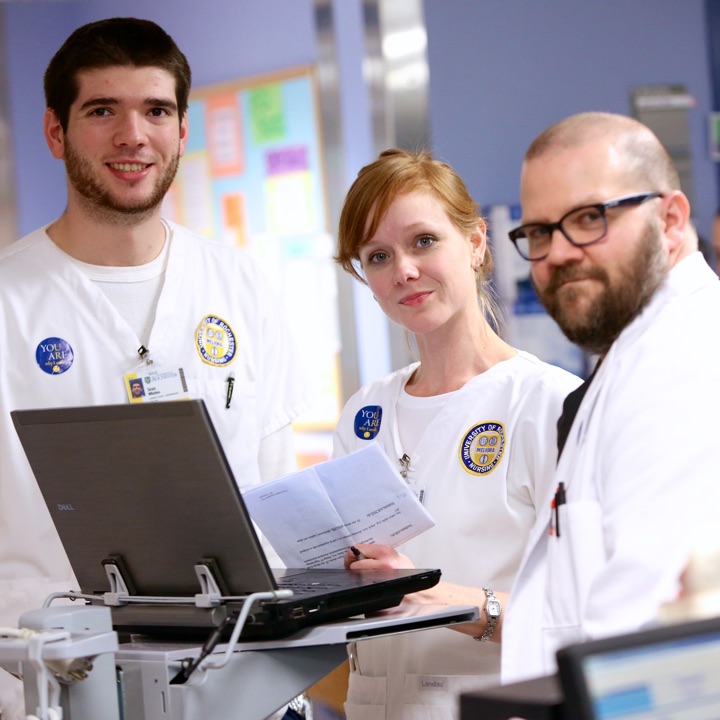 Tailoring specific academic program pages would be key to reaching the school’s prospective students because these are professionals who have very specific ideas about what they want.

mStoner talked with more than 20 groups and 100 people, including students from every program, each program chair, the marketing and communications team, the dean of the school, alumni and advancement, faculty, IT, and the medical center branding team.

Through this research, mStoner gained strong insight into the thoughts, feelings, and motivations of prospective students at the time they are deciding on a nursing field, and they developed empathy for the school’s target audiences.

mStoner gained strong insight into the thoughts, feelings, and motivations of prospective students at the time they are deciding on a nursing field.

mStoner talked with one student who had a career as a teacher, but wanted to become a nurse, after she required extensive treatment to recover from a car accident. Her motivation was based entirely on a desire to help others and to do something she felt passionate about.

mStoner also took a deep dive into academics by spending time with the chairs of each of the school’s degree programs. Comparing students’ thoughts and expectations of a program with those of academic chairs was enlightening.

For some, it was the first time thinking about how their programs differed, not only at the school level but also within and between the individual programs. For example, there are subtle selling points that differ between a nurse practitioner master’s degree and a doctorate of nursing practice.

mStoner used these insights and empathy to craft an approach that included:

Not just business as usual

“Because a lot of the school’s students aren’t traditional students — they have families or are changing careers — it’s really important to lay out the information clearly for them and help them understand the nuts and bolts,” said Ben Bilow, mStoner’s creative director.

The result was highly customized content and a strategy that even included color-coding degree plans, course descriptions, current student testimonials, career possibilities, and salary potential for each of the programs.

“We gave them a much more vivid picture of what it’s like to be a nursing student,” Bilow said.

mStoner also collaborated with the University of Rochester communications and marketing teams to gain buy-in and provide a fresh, distinctive look for the School of Nursing that was tied to the university’s global brand.

This support extended to gaining the buy-in for needed staff changes, including the addition of a position dedicated to maintaining the site content after implementation.

“mStoner helped us structure a new position and research how other universities do it,” said Harrington. “It made it easy for me to put that argument out there that this is important. When mStoner comes in and says, ‘You need a communications manager,’ people listen. Now, it’s just obvious that’s where we needed to be.”

Filling the new web communications manager role is Nora Hicks-Williamson, who transitioned from a public relations position in the school.

mStoner built a site that reflects who we are, but also one that we can maintain and sustain in the future. They woke us up in terms of realizing the website is one of the main tools we have to engage with potential students.

A strategy to guide the future

Launched in September 2016, the new, vibrant website showcases the school’s research, faculty, and students in one consistent voice and tone that’s a model for presenting nursing as a collaborative continuum.

“Each of the programs fills a different need for students in different stages, from associates to research professionals,” explained Fran Zablocki, an mStoner strategist who worked on the project. “The school considers those a collaborative whole, because everyone will enter a nursing workforce where they all work side-by-side every day.”

“We’ve gotten a ton of positive feedback, and people are saying how much they love it. They like that it’s clean, crisp, clear, and easy to navigate, and they like the look of it,” Harrington said. And they plan to keep it that way. “We get the value of the content strategy process, and it has changed the way we work now,” he said.

The content strategy that mStoner helped the school develop will steer them into the future and sustain the progress made in empathy and focus on prospective students.

“Now, whenever we want to add to the website, we will go to the content strategy,” Harrington said. “We have a communications team now that we didn’t have before, and a much better approach to overall communications.”

mStoner’s work, which adheres to the University of Rochester’s overall brand, provides the university with a model for ongoing collaboration with the School of Nursing, as well as other departments.

“It takes a lot of coordination, thought, and mapping out and understanding who you are and how you are developing the site in a structured way,” Stinson said. “A lot of that is what mStoner provided.”

Stinson, Harrington, and Hicks-Williamson agreed that they would recommend mStoner to anyone working in higher education.

“We were really impressed with the quality of the people at mStoner — really professional, flexible, ready to just help,” said Harrington. “We sometimes felt that other consultants were looking at their watch: ‘Well, that’ll cost you.’ We didn’t get that with mStoner. We feel like mStoner really worked hard to make sure that we got value.”

“Other companies want to come in and just give you this technology,” Harrington continued. “mStoner goes so much beyond that. There is so much research regarding website design and usability, and all of these steps before we even started looking at prospective design for the site. Before, I would have questioned why it was necessary, but having gone through it, I see now how valuable that process is. The planning took us from, ‘We don’t know what to do,’ to, ‘Holy cow, this site rocks!’”