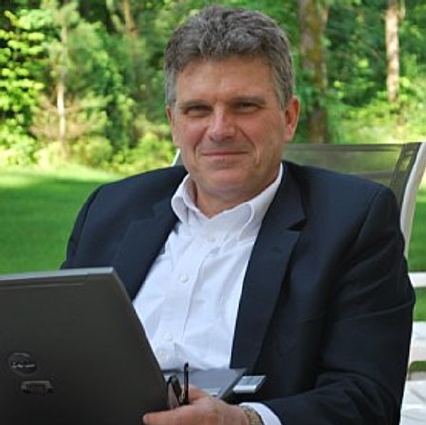 Dan Forbush has served as executive director, communications, at Skidmore College for more than two years. But for nearly 12 years previously, he was president of ProfNet, a division of PR Newswire. PR Newswire is the global leader in news and information distribution services for professional communicators, businesses, and organizations of all kinds.

PR Newswire didn’t create ProfNet; Dan Forbush did. As he explains in the following interview, he had a vision of how campus PR directors could offer their services directly to members of the media using email. At the time, Forbush was associate vice president, university relations, at SUNY at Stony Brook. His idea doesn’t seen like a big deal now, but in the early 1990s, it was a radical one. Many campus PR officers were just starting to use email—and many journalists at newspapers didn’t even have email access at their desks.

Dan’s plan was pretty simple: journalists would call or fax their requests for experts to ProfNet, which would distribute them via email to campus PR staff, who would then follow up on their own to pitch their own experts to journalists. At first, the daily emails were pretty lean; then, as journalists discovered that ProfNet yielded a wide range of qualified experts, they grew in size.

Eventually Dan left Stony Brook and began to run ProfNet full-time and, a year later, sold it to PRNewswire. The sale provided the resources and scale that ProfNet needed to build out a substantial web presence, and, using PRNewswire’s powerful and wide-reaching distribution, provided better placement for ProfNet members.

In 2007, Dan left ProfNet and joined the senior staff at Skidmore.

What experience did you have in higher education before ProfNet?

The most important experience I had was working with people like Fred Gehrung, Frank Dobisky, and Bill Tyson at Gehrung Associates in Keene, NH. GA was (and remains) a small PR firm that specialized at that time in national media relations for colleges and universities. I worked there for three years in the late 1970s and early 1980s.

We had a lot of success simply by virtue of the fact that we represented 40 colleges and universities and could come up with an expert on any subject for a reporter simply by getting on the phone to our clients. We weren’t just a PR agency; we were an expert resource. After GA, I went on to become head of PR at Syracuse University and SUNY Stony Brook, but this is the experience stayed with me. I wanted to again be involved in the day-to-day development of major stories.

What gave you the idea for ProfNet? How did you get started?

Back in the early 1990s, email was a new medium--our PR operation at SUNY Stony Brook could become a broker of queries for reporters in need of expert sources.

In short, we could create the same kind of interaction we had with reporters at Gehrung Associates, except we could do it for hundreds of institutions and we could provide the service virtually for free—which actually is how we ran it for the first two years.

What were some of the big challenges you faced in getting ProfNet off the ground?

It was fairly easy. Using a list that bought from CASE for $50, I sent out an invitation to about 900 news and information officers and quickly created a list of about 200 email addresses. Our IT department created a listserv in an afternoon. I announced the creation of the service in the “Journalists Forum” of CompuServe and on December 7, 1992, transmitted our first query for a UPI reporter who needed an expert on the hazards of winter flying. That proved the concept. Within two years, our team of student interns was sending 40 queries a day to a network of PR people at 600 colleges and universities. What really put us on the map was a story about ProfNet that appeared in The New York Times in May, 1994.

The biggest challenge was taking ProfNet global. Unfortunately, we never figured out how to overcome the barriers of language and cultural differences. ProfNet-like networks promptly sprang up in Germany, England, and Australia, and we played a direct role in helping to launch a ProfNet-like network in Sweden and South Africa, but we were never able to effectively link them in a world-wide service. Which was too bad, because I really enjoyed working with and visiting PR professionals and reporters in those far-off places.

What are some of the major changes ProfNet has made to respond to changes in technology?

When the Web came along, we created an expert database and launched a Webzine called “Media Insider.” Over a span of 12 years, we rebuilt the query delivery system four times. Over that same period, PR Newswire steadily integrated ProfNet’s main functions--returned to academic PR. I feel fortunate to have connected with Skidmore. It’s a very creative and forward-looking place.

The media industry is changing; how will ProfNet change in response?

One recent step they’ve taken is to transmit queries via Twitter. That looks like a smart move. Any step that sharpens the targeting of queries will make ProfNet more scalable and give it a strategic advantage. The same is true of HARO, their new competitor in the expert space.

What key lessons have you learned from your experience in creating and running ProfNet?

There are two. The first is that, since all of these new technologies are new, you have to be willing to experiment. The second is that evolution is truly blind. What works, works. What doesn’t, doesn’t. Sheer trial and error creates the path of development.

What’s the next big thing that advancement/marketing/PR folks in higher ed need to pay attention to?

One is Twitter, I’m afraid. I say afraid because I personally have not warmed up to the medium but a lot of people evidently have. Another may be Facebook Connect—the ability to synchronize one’s Web site with Facebook.

Some big challenges we’re confronting at Skidmore: How do we easily transform publications into compelling Web pages? And how do we efficiently manage the content that’s going into the seven or eight targeted email newsletters we’re currently producing. If anyone has answers, please drop me a note at .(JavaScript must be enabled to view this email address).

What’s it like coming back to a campus after ProfNet/PR Newswire? What surprised you?
I wasn’t really doing PR at ProfNet; I was running an information service on behalf of journalists and PR people. So I had to quickly get up to speed on things like content management systems, HTML email delivery systems, and online video. Beyond those, not a lot else had changed.