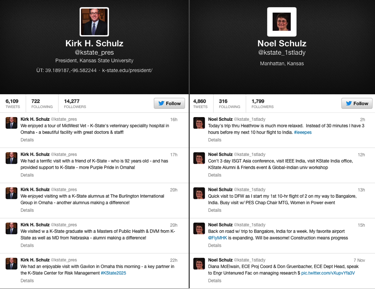 When Dr. Kirk Schulz accepted the appointment as president of Kansas State University, some of his colleagues at Mississippi State — where he served as vice president of research and economic development — suggested that he explore using Twitter to communicate in his new post. So he signed up.

That might have been the end of it because, as he admitted, “I really didn’t have a strategy.” Instead, Kirk (@kstate_pres) embraced social media, as did his wife, Dr. Noel Schulz (@kstate_1stlady). K‑State’s first couple are prime examples of a new generation of university leaders who have taken up Twitter, Facebook, and other social tools, and use them to reach and engage constituents.

Both of the Schulzes are engineers with degrees from Virginia Tech, where Kirk earned his Ph.D. (Noel’s PhD. is from the University of Minnesota). Noel holds a faculty post in electrical and computer engineering, and serves as associate dean for research and graduate programs in K‑State’s College of Engineering. In addition to her role as first spouse, of course.

Perhaps, their background in engineering helped both of them perceive the value of using technology for communications. But for whatever reason, these busy people with demanding lives, a family, and high-profile jobs find the time to tweet and post on Facebook. In fact, social media is essential in helping them be as transparent and approachable as possible.

Noel observed, “The previous president and first lady were at K‑State for 23 years, so they had very longstanding relationships on campus and in the community. I believe that social media has helped campus and community better understand the evolving activities that the president’s spouse has in today’s university setting. And many dual-career professionals can get to know and see both the academic side of me and the one concerned with social outreach.”

Kirk reports that now it’s fairly easy for him to step out of a meeting and tweet about it, post a photo, or respond to his Twitter followers from his smartphone. “It only takes a few minutes.” And he’s learned that this helps his many constituents understand what K‑State’s president does and the issues he’s tracking.

Kirk’s tweets and posts serve as important conversation starters. He said, “Even though I’m gone from campus a lot, social media has allowed me to communicate with a broad range of people. People on campus who follow me have some good insights into my travels and what I do. So when I see them, they can comment on what I’m doing or we have something to talk about.”

Social media is a great way to reach more far-flung constituents, too: “People walk up to me at alumni events in San Francisco or Seattle and say, ‘I feel as if I already know you!’ entirely as a result of what I do on Facebook or Twitter. And it’s not just people from one demographic — I have 65-year-old alumni who want to take a picture with me, hoping that I’ll post it on Facebook!”

For Noel, social media acts “as a bridge between the community and campus related to my multiple roles on campus. For community members that follow me because I am K‑State’s First Lady, they get to see the faculty/administrator side of my activities and hopefully peek into academic life a little differently.” And academics begin to understand the scope of her other role on campus that involves a different kind of activity.

Noel uses Twitter because, “It’s quick on my phone to send something out. My Twitter feed goes to my Facebook timeline, so it helps populate both. I find I also read Twitter more than Facebook daily as I can pick the folks I follow to keep up with my topics of interest, and Facebook tends to have more ‘personal’ info.”

What’s it like to be so transparent about your life? Noel said, “My parents really like it because they can keep up with our daily activities without necessarily talking on the telephone frequently, especially in busy times.”

One challenge in being so accessible, of course, is that people know where to find you to vent their opinions. Noel said, “Unfortunately this can be very personal and attacking as people hide behind their perceived ‘anonymity’ on social media and say things that they would not normally say in a face-to-face conversation. And sometimes what they say is pointed, personal, or worse.” Sometimes family members want to enter the thread in their defense — at this point, she noted, she counsels them to stand down.

Kirk reported that during one particularly prolonged and pointed exchange about a campus controversy, he took an hour and responded individually to criticisms and comments. That helped to quell the controversy, he said. “People felt heard and appreciated that I took the time to respond.”

I asked Jeffery Morris, K‑State’s vice president for communications and marketing, about the impact of the University’s president and first spouse being so active on social media. He observed, “In times of crisis or turmoil, the social platform can be an excellent tool to see how people really feel. Not always positive, but informative.” And, “by tweeting about events and functions, Kirk and Noel let the world know what they are doing and where. In my opinion this goes a long way to shaping perceptions about them and fulfilling their very sincere desire to be upfront and transparent as leaders.”

It’s often difficult to gauge how effective a social media-based outreach strategy is, though Morris and both of the Schulzes can share anecdotes about its positive impact at K‑State. And there are other, more telling, indicators of success. Current numbers show increased alumni participation (from 55,293 in FY 2012 — Kirk’s first year as president — to 118,000 in FY 2013) and donations (from $85 million in 2010 to $152 million in FY 2013). Of course, these increases reflect the work of many people, but open, authentic,  accessible university leadership must also play a role.