[UPDATE: We published an update to this post on 9 September 2010; it focused on new PBO initiatives and lessons learned from the campaign.]

Powered By Orange, launched in March 2009 by Oregon State University, is the most comprehensive university social marketing campaign that we’ve seen to date.

With an integrated marketing communications plan already in place, OSU’s next step was to create a campaign to raise awareness of the university in Portland, Oregon’s biggest media market.

Unfortunately, the budget for TV time or outdoor advertising wasn’t available. But, drawing on insights from the original communications plan, a group of team members from the University Advancement division developed a plan and creative concepts to take advantage of an integrated social media campaign. They tested these ideas with a mixed group of campus staff and leaders, including representatives of the OSU Foundation, the OSU Alumni Association, college communications representatives, admissions staff, and others.

These ideas evolved into Powered By Orange, which is now well-entrenched at OSU and appears to be on the verge of going viral.

According to Luanne Lawrence, vice president for advancement at OSU, “The feedback was consistently supportive of the Powered By Orange concept. So, we developed the campaign a bit more and tested it at a few alumni events and in focus groups and discussions with faculty, staff and students. Each conversation improved the concept and grew it to where it is going (and is still growing).”

What’s Powered By Orange? Here’s the answer from the PBO website:

“It’s you — the network of alumni, students, faculty, staff, friends and fans connected to Oregon State University. It’s the positive impact you make every day in Portland and beyond — on the economy, the environment and the community. Use this Web site to tell your story and connect with the other practical idealists who are Powered by Orange.”

One of the key insights from the research that led to the integrated marketing plan was the necessity of connecting with younger alumni, who are critical to future giving. Testing showed that this audience in particular wanted reassurance that OSU was making an impact on the world. “Not only did the research gave us insights into the needs of some of our key audiences—but it was a no-brainer to reach out to young alumni through channels that they were familiar with,” said David Baker, OSU’s director of web communications.

In short order, Baker’s Web Communications unit, in collaboration with University Marketing, designed a website powered by WordPress to serve as the hub for Powered By Orange. Planning and execution of the site and social networking components, Baker said, “took a couple of months from first concept to site launch. We were able to move quickly because we had that research.”

[Note: for those interested in the details, Web Communications at OSU has six staff members: a director, assistant director/developer, web designer, writer, multimedia producer and a social media specialist. Baker said, “This last role is brand new as of last month, and we currently have it filled temporarily by a recent grad with a marketing background. If it works out (and it’s going nicely), we’ll make it permanent.”]

Though originally targeted to Portland, the campaign took off quickly. “Believe it or not, we’re still in the quiet phase of the launch,” Baker said. “We haven’t done much promotion to speak of, no print buys, no advertising, no PR. But we already have more than 10,000 page views on the PBO site and more than 1,600 members in our Facebook group. PBO has resonated well with the alumni who’ve discovered it, both young & old.” 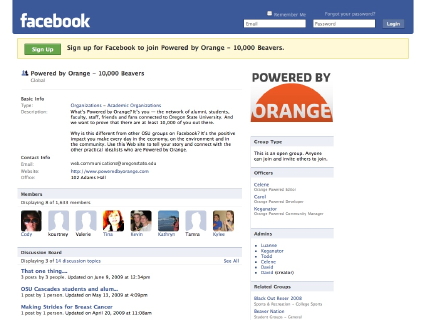 With such a bold campaign, Luanne Lawrence knew that she had to be proactive in unveiling it for many OSU constituencies. She observed, “Like all other states, Oregon’s immediate financial future is dim. With a higher-than 12 percent unemployment rate and university reductions in the 12–22 percent range, morale was low. So, I decided to try to take PBO out on a road show to gauge its ability to create excitement, shared vision, anecdotes, and dreams of how to implement it. We also wanted feedback on how to make it better.”

She continued, “The response has exceeded my expectations. PBO has become something for people here to ‘hold on to.’ Faculty, staff and students are defining what the campaign means in their own way. My goal is to not control this campaign, but let others run with it. I want Beavers of all walks of life to define what it means to be ‘powered by orange’—to define their contributions as Beavers to their professions and communities; to use our main color, orange, to express themselves artistically, to make it their own.”

One big surprise of PBO, Baker said, is that this has actually happened. “Other departments and units at OSU became so interested in adapting it for their purposes. That made us change our thinking and change our direction to enable people to use the campaign to be their own advocates. We’re trying to be flexible in giving up control. The flexible theme resonates with people who are used to having control over their communications, rather than having it dictated to them.”

For example, the Athletics department simultaneously rolled out the “I am Orange” campaign. Luanne Lawrence noted, “We are seamless in using the color to self identify and create spirit … at least in this first phase.” 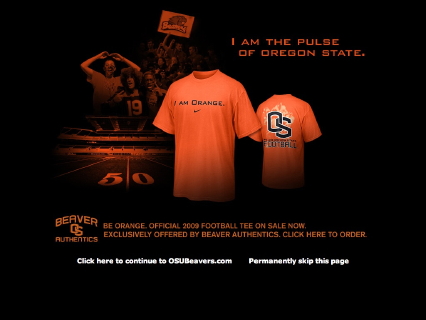 The campaign handed out PBO stickers to this year’s graduating seniors, who showed up at graduation with the stickers on their caps.

Luanne Lawrence reported, “We intended to keep this in the quiet phase until September when we planned a major public launch, but now I prefer to say that we are in the ‘viral’ phase before the public launch. It has been embraced by many people already.”

“It has really taken off on campus—students really like it,” Baker said. This could be just one more sign that the PBO campaign may be set to go viral.

Baker emphasizes that OSU is not only in a “launch and learn” phase with the PBO campaign — but also is assessing its impact. Most of the feedback to date has been anecdotal — and positive. He noted, for example, “Feedback from Luanne Lawrence’s presentations to different groups has been very positive so far, as it has from the focus groups we’ve conducted.”

Baker is also tracking the PBO Twitter feed. “We only have about 260 followers, but they are mostly business owners who are interested in sustainability. This could be very useful in the future.”

When asked whether audience members were contributing content — in particular blog comments or homemade videosBaker noted that audience participation was heaviest on PBO’s Flickr gallery, where people were posting and tagging photos. “We found it very difficult for people to produce videos — which is an experience that is fairly common on other websites, too.” As for blog comments, he observed that the blog is an institutional blog and has less of a personality and, as a result, less engagement, than a personal blog might have.

In any case, OSU is quite satisfied with the results of the campaign so far.

When asked what advice he’d give to people at other institutions who wanted to launch a campaign like Powered By Orange, Baker noted three key points:

There hasn’t been much pushback on the PBO campaign, Baker reported. And, what little has occurred, Luanne Lawrence noted, comes from communications professionals who are uncomfortable with the notion that OSU is launching the campaign and doesn’t intend to control it. “I run up against some who subscribe to older models—pushing out press releases, paying for ads, controlling events, etc. While we still have these tactics in our mix, we are risking as much as we can to empower larger communities.”

Lawrence added, “This is not a high-comfort area for some in higher ed, so I have learned that it takes a tireless and enthusiastic leader to ensure that this approach is successful. If I weren’t a vice president with such a passion for making this campaign viral and in using a mix of traditional with very nontraditional media, I’m not sure this PBO campaign would have seen the light of day.”

In short, to ensure success of a campaign like this, one has to take risks.

And no campaign with perceived risks will be successful without a visionary and indefatigable leader. Clearly, PBO has two such leaders who are willing to venture out, but not recklessly. OSU’s approach demonstrates that research, planning, and thoughtful experimentation increase the odds that such ingenuity will be rewarded.

Update: See the post Kaukab Jhumra Smith, a contributing editor at SmartBrief, wrote about Powered by Orange for Smartblog on Social Media for some updates on the campaign.