Powered by Orange: An Update 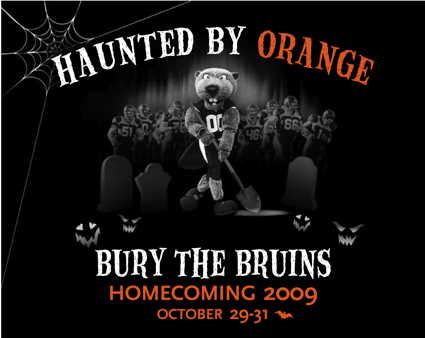 When we last blogged about Oregon State University’s Powered by Orange campaign more than a year ago [Powered By Orange: A Comprehensive Social Media Campaign], we were impressed by the inclusion of so many channels into a campaign built around a social media core. That blog post has continues to be one of the most popular on mStonerblog, for good reason: PBO is a premier model of how a well-planned and managed campaign can grow beyond its initial purpose. Powered by Orange, which focused initially on building awareness of the university in Portland, Oregon’s primary media market, has evolved into a broad-based brand awareness campaign, growing in reach and influence in the past year.

Here’s what the CASE judges, who gave PBO a Gold award for “Best in Social Media,” said about it [note: I chaired the judging panel]:

Powered by Orange is a broad-based, comprehensive, multi-channel campaign by Oregon State. The hub of the campaign is Poweredbyorange.com, which provides visitors “a collection of resources for learning, connecting and engaging with the institution and with each other, the site offers a set of features that can turn passive viewers into an engaged core of brand ambassadors.” The campaign is comprehensive, offering social networks created for the PBO campaign; a blog; a custom Google map; a video series; and a variety of other media, including downloadable tools, wallpapers, posters, signs and other collateral that gives users a way to brand their workspace or place of business. The breadth of this campaign is truly impressive, as is the execution and the university’s “launch and learn” approach to developing PBO. And there are encouraging results, including 55,500 distinct visits to the PBO site since its inception, with the most visits coming on the official launch day of the campaign; more than 10,000 social media connections on PBO-specific networks; and comments and blog posts about PBO.

We thought it was time to check in and see what else PBO had to report. Here’s an update.

Before PBO launched in 2009, OSU thoroughly researched what thousands of students and alumni thought about the university. This research allowed staff to shape an effective campaign.

Knowing what messages about OSU might resonate with its audiences was key to early success, according to David Baker. As director of web communications at OSU, Baker was a key figure in shaping PBO and helping it evolve. “Our audiences were prepared to believe that OSU was a small-town school with agricultural roots. In reality, we were doing amazing things that they were not aware of, but they wouldn’t have believed glossy ads or videos. By using voices of alumni, we were able to showcase what OSU is doing with great authenticity. And that authenticity is very important to our audience.” The authentic tone of PBO has allowed it to spread both externally and internally.

But success has its downsides. Like others who are managing successful marketing campaigns, some OSU staff are a bit tired of the PBO meme. But now’s the time to dig in and focus, not pull back.

Like other successful social media campaigns, PBO has allowed audience members to coopt its theme and imagery. And that has helped its spread. Baker noted, “We’ve been flexible enough to allow users to define the campaign for themselves. It’s powerful because PBO gives them a language to talk about OSU.”

On-campus, this means that university divisions, extension offices, colleges, and other units can talk about PBO in their specific contexts. For example, OSU’s Alumni Association organized a Haunted by Orange homecoming event last Halloween. Health and Human Services put together a Powered By Orange 5k race last fall. “This wasn’t planned for, but has become very useful,” Baker said.

Faculty even created a “furloughed by orange” logo to protest staffing cuts. Rather than view this as simply a negative, Baker cites it as evidence that”Powered by Orange has become a buzzword. Furthermore, he said, “We’re even seeing the media pick up PBO: it’s showing up in titles of articles or as a play on words, without us suggesting that they use it.”

New focus on alumni and their community impact

Early this year, PBO campaign messages revolved around ways in which OSU research has made an impact on everyday lives, particularly in terms of food, water, modern engineering, sustainable energy needs, and climate. Now, the focus of the campaign has shifted toward emphasizing OSU’s impact on the economy, primarily through a focus on alumni-run businesses and graduates entering the work force.

To make this shift, PBO initiated the Orange Spotlight. The feature invites nominations for businesses that are “Powered by Orange”—“owned by an Oregon State alum, have lots of OSU alums working there, or are just friends of OSU. They also drive innovation, support economic growth, and serve in the community.” Each month, a winning business is selected for the “Orange Spotlight,” which includes a feature story on OSU’s website, promotion on its social networks, and inclusion in a campaign to push OSU fans to featured businesses via Powered by Orange. People who nominate businesses are entered in a drawing for OSU Football season tickets.

The result? Baker said, “We’re getting hundreds of nominations for businesses with some kind of OSU connection.” The benefits can be real for businesses that are profiled. “We just spotlighted a vineyard in Napa Valley, Lamborn Family Vineyards. Its owners are graduates of the OSU horticulture program and using sustainable growing techniques. Lamborn got great publicity when WineBusiness.com picked up the story. This gave us a great story to reuse as we talk about OSU’s new wine institute. It was a win-win for all concerned.”

The “Orange Spotlight” nominations have enabled OSU to gain detailed information on hundreds of businesses and, Baker noted, “That’s a pretty significant result for us.”

From the start, I’ve admired OSU’s attitude toward PBO. Baker called it “launch and learn.” This approach allowed the university to evolve the campaign as they learned what was — and wasn’t — working.

For example, OSU learned early on that they just weren’t going to get the volume of user-generated videos they had hoped for. But the void was partially filled when communicators on campus generated videos that could be used by PBO. “For example, a staff member in international studies recorded about 15 videos of students sharing what PBO means to them—in their native languages. This was part of a recruiting program to bring international students to OSU.”

The PBO team compensated for the lack of user-generated video in other creative ways. Baker noted, “We hosted an event to get students to share their definition of PBO. We attracted about 100 students and, as a result, created ambassadors to talk about OSU. Now we do this wherever we go.”

Baker reports that initially, the most engaged audience — measured in terms of participation by wall posts, “likes,” and comments — has been in the Facebook community, which is currently at about 10,000 members. Interestingly, the center of gravity seems to be moving toward the PBO blog.

“We launched the blog at the beginning of the campaign, but didn’t get much in the way of commentary at first. But after a few popular blog posts posted on Facebook, we’ve gotten more participation.” PBO’s blog now has posts on which dozens of people have commented.

Baker observed, “I think that part of this is that people are picking up Facebook’s sharing features. We’re seeing that the “thumbs up” for blog posts is more popular than expected. When people “like” a blog on Facebook, it shows up automatically on their Facebook wall and helps to spread the word about the post.”

Baker stressed that PBO is an ongoing effort for Oregon State. “We know that we aren’t going to be able to measure the larger impact of PBO until we can go back and resurvey in 3–5 years to see how things have changed against our original benchmark. Meanwhile, though, we can observe our members and followers on various networks. Plus we’re keeping track of the connections and the anecdotal data, which is very important to keeping a campaign going.”