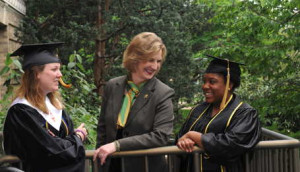 Cheryl B. Schrader, Ph.D., became the chancellor of Missouri University of Science and Technology on April 2, 2012. A former associate vice president and dean of engineering at Boise State University, Schrader is one of few female engineers to ascend to the top leadership position of a college or university in the United States [she earned an M.S. and Ph.D. in electrical engineering from Notre Dame]. Though she’s a newcomer to Twitter — @SandTChancellor began tweeting in August — she’s clearly thought about how it can help her communicate about her institution.

What prompted you to begin using Twitter for communicating with your constituents?

For the past few years, I’ve been interested in learning about social media as a means for sharing information with niche audiences, and, since becoming chancellor here last April, I’ve sought ways to better connect with our students, alumni and others. After a conference sponsored by the American Council for Education, I met with other university leaders who use Twitter, and their examples convinced me that using Twitter would be a good approach. So I signed up for a Twitter account and started tweeting right before the beginning of the fall 2012 semester!

I do not use other social media in my role as chancellor.  Personally, I use social media that enhances research collaborations, including wikis and Google Docs.

Do you write your own tweets?

I write all of my own tweets. Initially, I was advised and assisted by members of our communications department, which manages S&T’s official institutional social media presence.

How will you avoid using social media to create “a cult of personality” vs. promoting the university’s brand?

From what I’ve learned so far from my new and somewhat limited experience with Twitter, some of the strongest institutional brands on social media are those that are willing to express personality and respond to followers. This holds true for official university accounts as well as for the accounts of institutional leaders. As chancellor of Missouri S&T, I am one representative of our brand to our constituents. But there are others – coaches, faculty and staff members, and departmental accounts. It’s important that we all realize our roles as “brand ambassadors” for our institutions and put the university’s reputation at the forefront, rather than to use social media to promote ourselves or our own agendas.

What advice do you have for your peers who may be considering whether to begin using social media?

I suggest that anyone who is considering social media first determine whether he or she is willing to take the time to post regularly (at least a few times a week) and to respond to constituents who ask questions or respond to posts or tweets. If a leader is not comfortable with social media but is interested, I would encourage that person to learn all he or she can before launching into Twitter or Facebook. Then talk to people within your institution who are social media-savvy and learn from them.

The other suggestion I have is that anyone who uses Twitter should be authentic, while representing their institution’s brand. By being authentic, I mean that presidents, chancellors and other campus leaders who tweet should use their own voice and avoid “institutionalese.” This also means that you should create and post your own tweets, rather than having staff members ghost-tweet.

Looking ahead, do you foresee that presidents will be expected to have a Facebook profile or a fairly robust presence on another social channel? When might that start to be a common expectation?

*[Note: this is one of a series of interviews with college and university CEOs about how they use social media in their role as institutional leaders. I conducted this research for an article that will appear in the November-December issue of CASE Currents.]