Today marks the release of the white paper for the 2015 Survey of Social Media in Advancement that we conduct in partnership with CASE and Huron Education. Its title — “Refining, Prioritizing, Expanding: Social Media and Advancement in 2015” — gives you a good sense of this year’s research findings.

Essentially, the results support our observation that social media is now mainstream, a foundation for many significant advancement activities, including fundraising. At the same time, a significant number of institutions still struggle with how to measure their success.

Some of the most significant findings from this year: 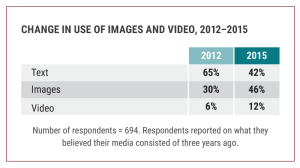 We’ve conducted this research for the past six years. When we began, little information existed about the ways in which schools, colleges, and universities used social media in their advancement activities — communications, marketing, fundraising, alumni relations.

It’s particularly revealing to watch how institutions have gained experience in using social media and used that experience to become more proficient and successful in their approaches to this essential communications and engagement tool. Over the past two years, our findings indicate a growing sophistication with social media in many aspects of advancement.

One good example is the fact that many institutions are becoming more adept at assessing the impact of their social media activities. Even those that don’t are aware of how important it is to do so. Not surprisingly, institutions that are more successful using social media do much more planning and assessment than those that aren’t.

In addition to taking a deeper look at what’s happening with the use of social media in fundraising, the white paper explores what institutions that are successful at using social media do, in contrast to those that aren’t. Our report also showcases two popular social-powered fundraising approaches — giving days and micro-funding.